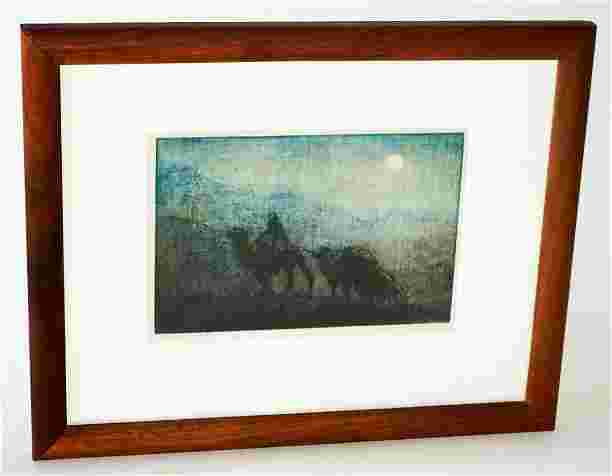 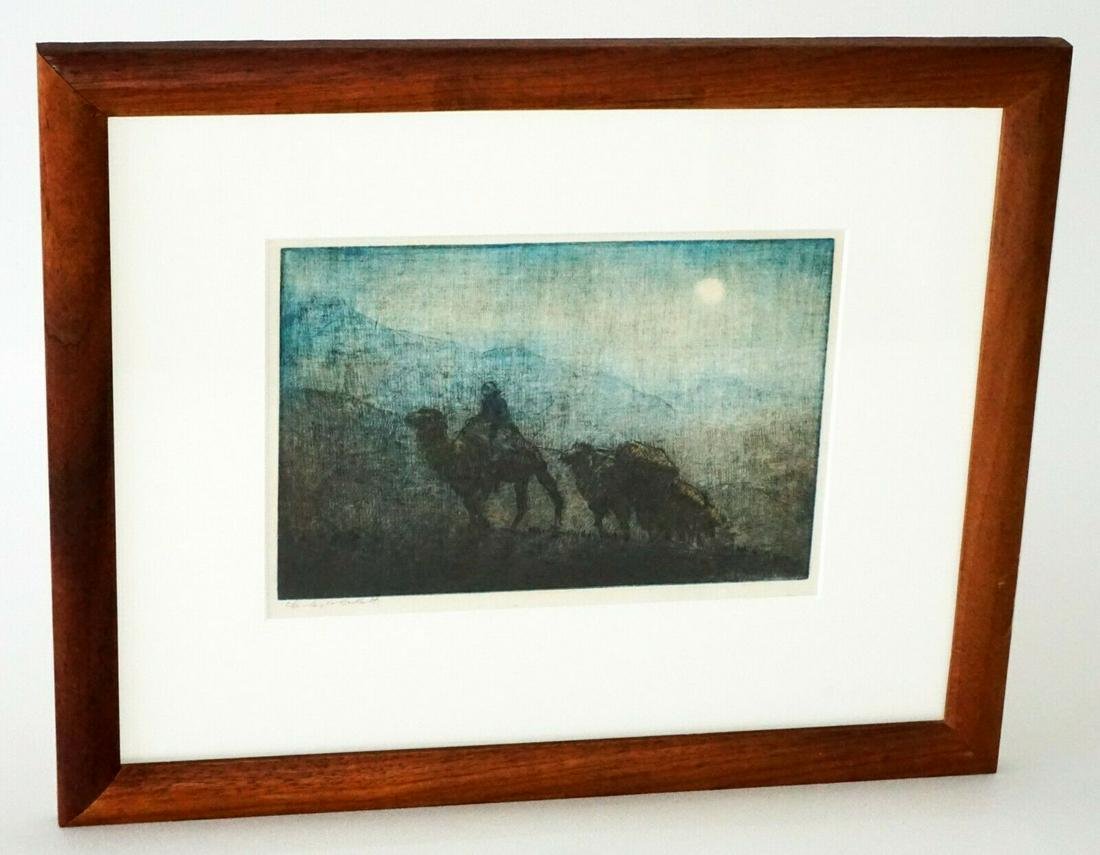 Up for sale from a local estate in Honolulu Hawaii this 1923 Hawaii etching print that was hand-colored with watercolor and is titled "Moonlite on Western Hills, Peking" and shows a small caravan of camels under a hazy sky and is signed in graphite by the well known artist Charles W.Bartlett (1860-1940). The condition is described above for more information please check the photos.
Measurements:
Print 5 ? inches x 8 ? inches
Frame 12.5 inches x 15.5 inches
More about the artist:
Known for watercolor paintings and woodblock prints, especially of scenes from his travels through Southeast Asia, China, and later Hawaii, Charles Bartlett was born and raised in England. He first work in a metallurgical company and then at the age of twenty-three began a fine-art career by enrolling for three years at the Royal Academy in London. Then he went to Paris to study at the Academie Julian in Paris. In 1889, he returned to England and married but lost his wife and infant son in childbirth.
He spent a year traveling in Europe with his friend and fellow artist, Frank Brangwyn, and painted most figure works of peasant women and children, likely working through his grief at his own personal loss. Later he did landscapes as well as peasant genre, and worked in both oil and watercolor. He was especially commended for his watercolors, and in recognition of this skill, was one of the first 25 members elected to the prestigious group, Societe Peinture a l'Eau, in Paris.
In the following years, Bartlett returned to England, remarried in 1898, and exhibited several oil paintings including at the Royal Academy and the Salon des Beaux Arts. At this time, he became interested in printmaking, especially etchings.
In 1913, he and his wife began a year and a half sketching and painting trip to India and also went to Ceylon, Indonesia, and China. In 1915, they arrived in Tokyo, Japan. There they met the Austrian artist Fritz Capelari who introduced them to publisher Watanabe Shozaburo. From this meeting Bartlett and Watanabe formed a collaboration whereby Bartlett's watercolors were made into woodblock prints. Bartlett used Watanabe print shop as a work place for carving, and the resulting prints had simple designs and flat areas of rich color in styles ranging from modern to traditional.
In 1917, Bartlett and his wife Catherine went to Hawaii intending after a short visit to return to England, but they were so enamored with the scenery and people of Hawaii that they settled in Honolulu. Working as an association of Watanabe, Bartlett designed woodblocks that were made into prints. He and his wife continued to travel widely, and attended print exhibitions on the mainland United States. However, they built their life in Hawaii, being active in the art community and making good income from his printmaking activity, although Bartlett also received portrait commissions from wealthy, prominent Hawaiians.
During the Great Kanto Earthquake of 1923, most of Bartlett's woodblocks were destroyed, but Watanabe was able to salvage some from his collection as was Bartlett, so prints continued to be made throughout the 1920s. After Bartlett's death in 1940, the remaining blocks for his prints were scored to prevent reprinting
In 1928, Bartlett was a key organizer of the Honolulu Printmakers as well as local artists A.S. Macleod, John Kelly and Huc Luquiens. From 1929, the group has held an annual exhibition at the Honolulu Academy of Arts, and with each exhibition, they offer a gift limited edition print by an outstanding member. In 1933, Bartlett was chosen to create the very first gift print, a color etching called Java, depicting an Indonesian peasant family returning home after a day's work, against a background of rice paddies and palm trees.
In 1939, the Honolulu Academy held a major exhibition of Bartlett's work with 63 paintings and prints. He died the following year at the age of eighty. In 2001, the
Honolulu Academy of Arts held a retrospective including all of his woodblock print designs as well as a collection of original works in oil and watercolor.

Listed By: Dealer or Reseller

“The print is in clean condition in a Hawaii Koa wood frame, the print was not inspected out of the frame but looks as if it maybe has been conserved in the past (it is just so clean), there is one minor paper top layer loss bottom right outside the image in the margins”

31,425 Followers
Get notifications from your favorite auctioneers.
Jasper52 online auctions by: