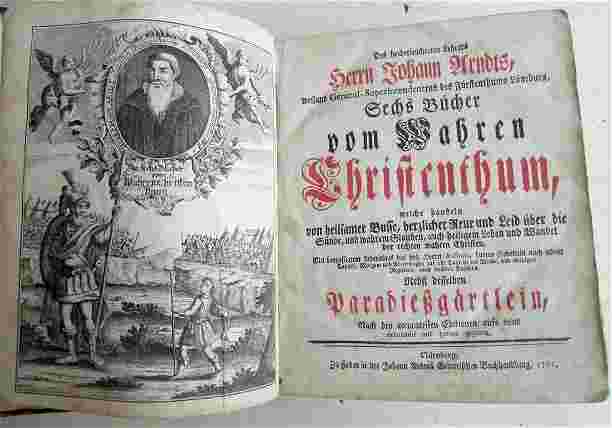 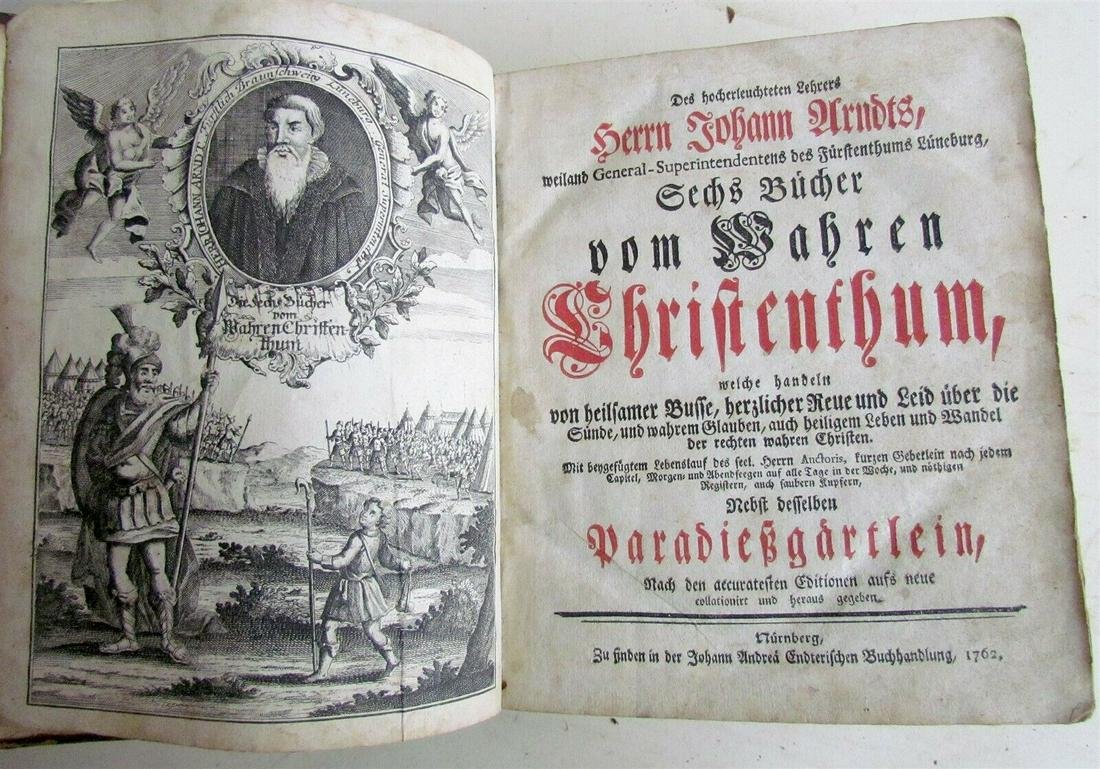 Wahres Christentum & Paradiesgartlein by Johann Arndt bound together.
Printed in Nurenberg in 1762
Leather bound. Size 7 1/4 by 9 1/4"
Illustrated.
Worn binding, front cover is holding on cords. Otherwise very good condition.
Johann Arndt (1555 – 1621) was a German Lutheran theologian who wrote several influential books of devotional Christianity.
His whose mystical writings were widely circulated in Europe in the 17th century. Although reflective of the period of Lutheran Orthodoxy, he is seen as a forerunner of pietism, a movement within Lutheranism that gained strength in the late 17th century.
Arndt studied at Helmstadt, Wittenberg, Strasbourg, and Basel. In 1583 he became a pastor at Badeborn, but in 1590 he was deposed for refusing to remove pictures from his church and to discontinue the use of exorcism in Baptism. Both were considered offenses against the Calvinist concept of strict purity and simplicity. Arndt found asylum in Quedlinburg the same year and in 1599 was transferred to St. Martin’s Church at Brunswick.
The principal work among his many writings, which were inspired by the mystics St. Bernard of Clairvaux, Johann Tauler, and Thomas à Kempis, is Vier Bucher vom wahren Christentum (1605–09; “Four Books on True Christianity”). Translated into most European languages and widely distributed in Arndt’s time, it served as the foundation of many devotional books, both Roman Catholic and Protestant. Its publication aroused strong controversy among Lutherans. It was also a chief influence in the life of Philipp Jakob Spener, who was a founder of Pietism, a movement that stressed simple Christian living. Arndt held that to follow orthodox doctrine was not enough and that the Christian must undergo a moral purification through righteous living and communion with God.
In Mennonite circles his books were widely used, replacing older, genuinely Mennonite devotional material (which was never very extensive). In fact the Wahres Christentum was the most used devotional book in German Mennonite families from about the middle of the 17th century on for possibly two centuries. With the exception of Gottfried Arnold, no Lutheran author had such enduring influence in Mennonite circles as Arndt, working for an unnoticed shift in Mennonite piety toward Pietism. Many of his books were found in Canadian Mennonite communities. It has not been known until recent a times that the Paradiesgartlein served also as a source for the first Swiss-Mennonite prayerbook the Ernsthafte Christenpflicht of 1739.

32,444 Followers
Get notifications from your favorite auctioneers.
Jasper52 online auctions by: