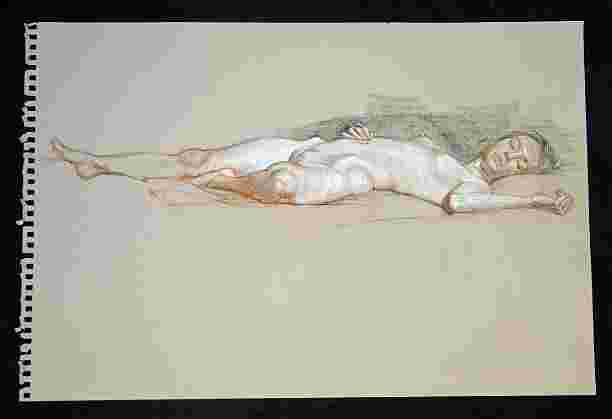 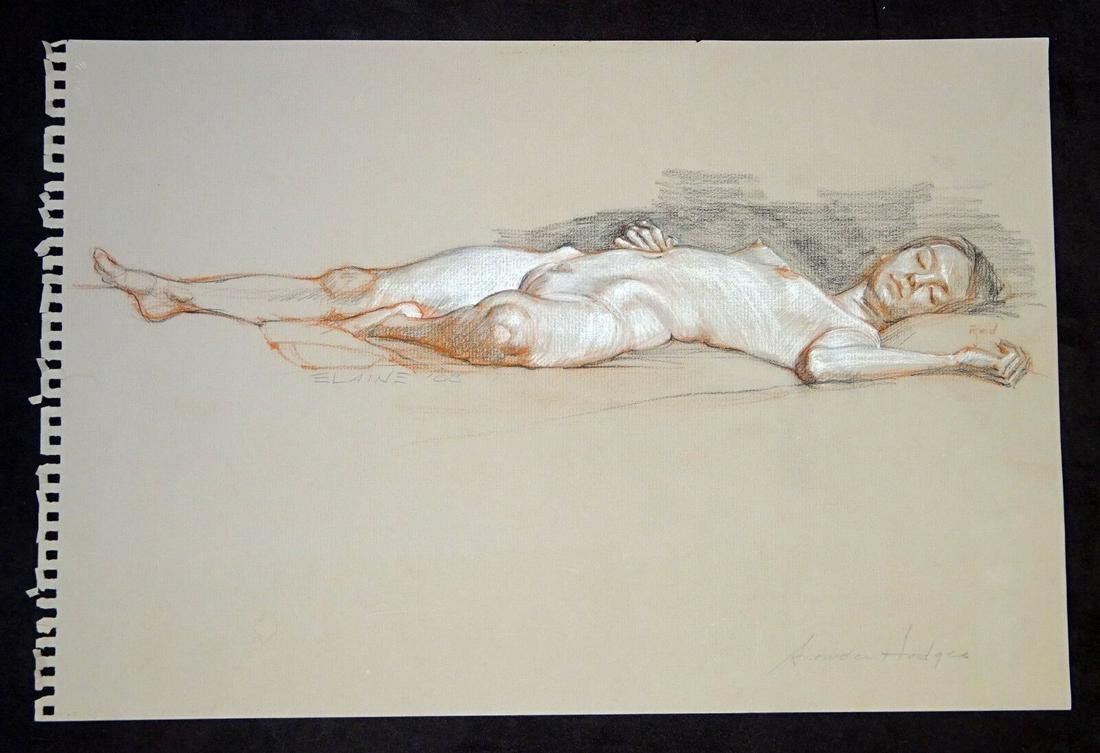 Up for sale from a well known collector in Honolulu this vintage unframed mixed media conte and charcoal drawing on paper that is titled "Elaine" and depicts a sleeping young nude girl and is by well known artist Snowden Hodges. The condition is described above for more details please check the photos. There will be multiple pieces listed from the collection so please check the others in our eBay store.
Measurements:
Sheet 12 inches x 18 inches
More about the artist:
Snowden Hodges was born in Baltimore and began drawing and painting in the nineteen-sixty’s under the tutelage of several of the well-known Maryland Realists including, Earl Hofmann, Joseph Sheppard, and other artists who studied with Jacques Maroger. He attended The Maryland Institute College of Art on a Senatorial Scholarship and received a BFA, cum laude, in 1970 and an MFA in 1976. He has exhibited extensively nationally and internationally. His solo exhibitions include exhibits at The British Institute of Florence in Italy, Gump's Gallery in San Francisco, St. John's College in Annapolis, Maryland, The Queen Emma Gallery in Honolulu, and the Commons Gallery at the University of Hawaii at Manoa. In 2002 his solo exhibition at The Honolulu Academy of Arts, Snowden Hodges: Florence and the Labors of Hercules, received critical acclaim both in Honolulu and nationally.
His work has been featured in many juried and group exhibitions, among them: The Contemporary Art Museum in Honolulu, The Hawaii State Art Museum, The Phoenix-Chase Galleries Ltd., Baltimore, The Maryland Federation of Art Gallery in Annapolis, The Downtown Gallery of the Delaware Art Museum, the Johns Hopkins University, the Brad Cooper Gallery in Tampa Florida, and the Sanyo Hoso Gallery, in Takamatsu, Japan. In addition, his paintings have been selected eleven times for the prestigious annual "Artists of Hawaii Exhibit" at the Honolulu Academy of Arts.
Many of his works are in important national and international private, public, and corporate collections, including the Smithsonian Institution in Washington, D.C., The Contemporary Museum in Honolulu, The Honolulu Museum of Art, the Hawaii State Art Museum, The Pacific Club of Honolulu, The First Hawaiian Bank, The Bank of Hawaii, Kagawa College in Shikoku, Japan, and the British Institute of Florence, Italy.
Hodges has received honors for his paintings and drawings including awards from The Delaware Art Museum, The Artist’s Magazine, The Brad Cooper Gallery in Florida, the “exit” gallery in Ohio, the American Academy of Art in Chicago, and awards in three exhibitions sponsored by the Honolulu Japanese Chamber of Commerce. In 1977 he was selected as the expedition artist as part of a National Geographic Society team studying prehistoric Native American structures and astronomy in the southwestern United States. He has received theHawaii State Foundation for Culture and the Arts -Acquisition Award five times. In 2002 Hodges was the subject of a short documentary “One-Minute-Egg”, which was produced by PBS Hawaii in conjunction with Egg the Arts Show on national PBS. In 2011 the Emmy Award winning documentary, Artists III by Stuart Yamane, featured Hodges and his Atelier Hawai’i. The Honolulu Japanese Chamber of Commerce, in 2012, honored Hodges with a Lifetime Achievement Award in Art.
In 2002 Hodges created Atelier Hawai’i, a program in classical realism. In this intensive, immersion curriculum students learn time-honored techniques of drawing and painting. Until 2012, when Hodges retired from teaching, the program was hugely successful, receiving critical acclaim and drawing students from Hawaii, the Pacific Islands, Europe, and the US mainland.
Hodges currently resides in Honolulu and is a University of Hawaii Professor Emeritus of Art. His work is shown by The Fine Art Associates and the Cedar Street Gallery in Honolulu and the Harris Gallery in Houston, Texas.
.