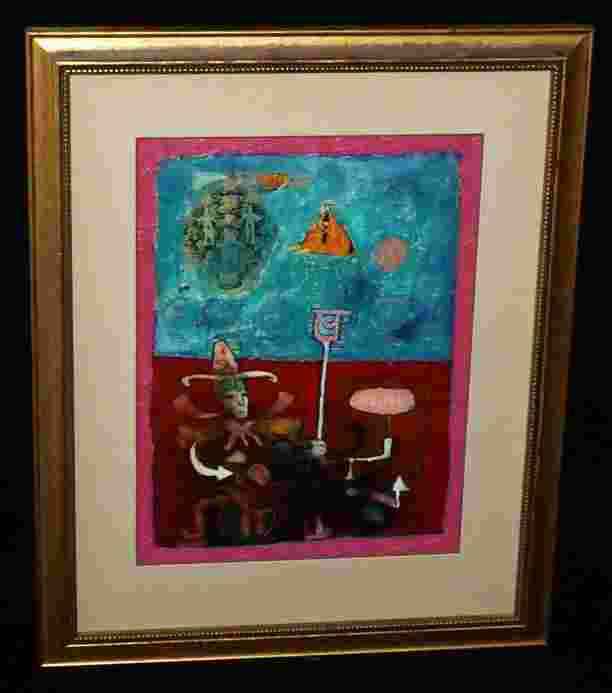 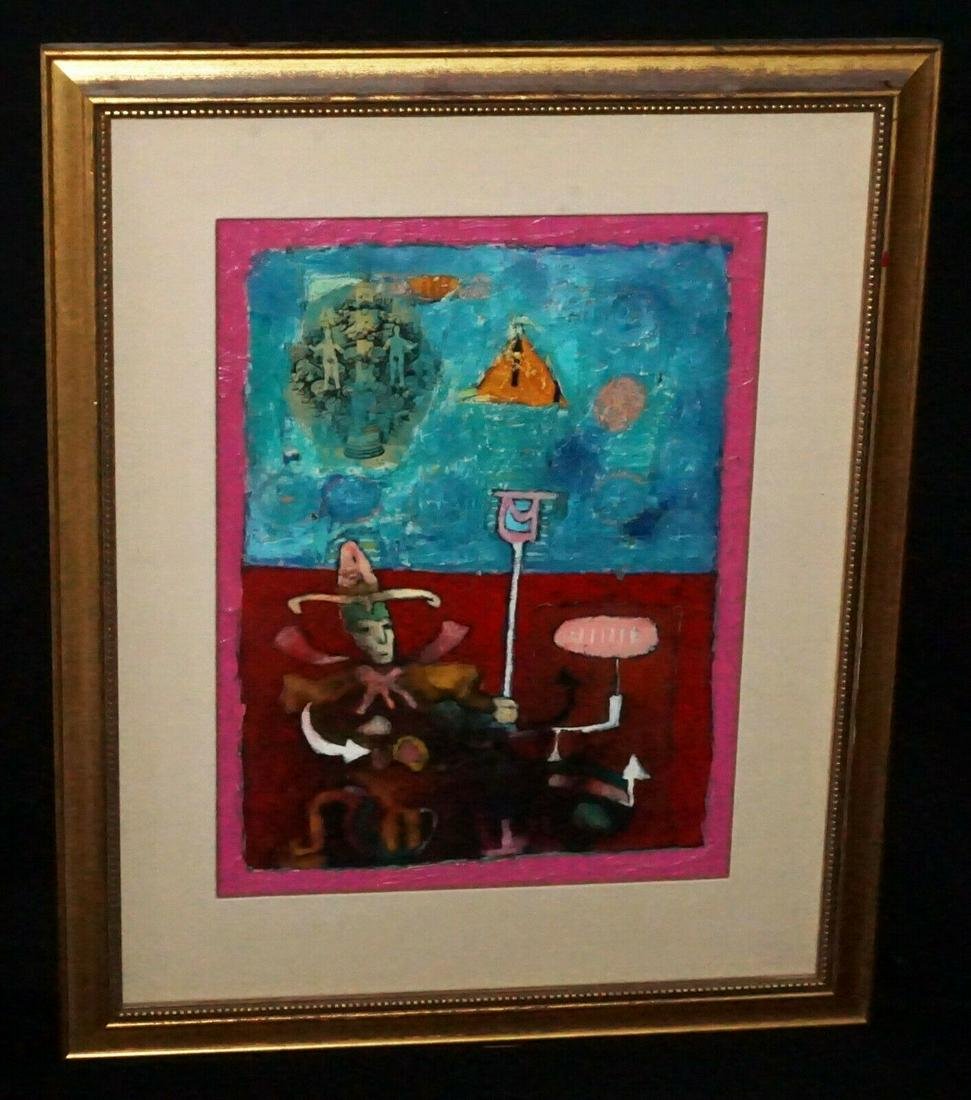 Up for sale from a local estate in Honolulu Hawaii this US framed mixed media collage painting that is untitled depicting a abstract scene with a jester looking figure under a Adam and Eve deign and was created by Oscar Bernal (born 1945). The condition is described above for more information please check the photos.
Measurements:
Print 19.5 inches x 14.5 inches
Frame 29 inches x 23.5 inches
More about the artist:
Oscar Fernando Bernal (born July 27, 1945) was a Mexican painter from the border city of Nogales, in the state of Sonora Mexico. Bernal's mother, Angela Ley was a schoolteacher who encouraged Bernal and his two sisters to develop an array of cultural interests at an early age. Moreover, Bernal's mother was the daughter of a wealthy Chinese businessman from the state's capital of Hermosillo and one of the casualties in the brutal persecution against the Chinese community, which swept Sonora and other northern Mexican states during the first two decades of the 20th Century. His father worked as a customs officer and often had to relocate his family to various cities across the Sonora-Arizona border. A childhood spent in different cities, at times away from his parents, and his mother's suspicious nature developed as the child of a victim of xenophobic persecution and emphasis on education, shaped Bernal's sensibilities at a young age. His work, described as "a marriage between Velasquez and Francis Bacon", often uses humor to explore dark subject, which often point to a rich inner world in which existential questions enter a dialogue with the specificities of up-rootedness, nostalgia, philosophy and myths.
Early Life
Bernal's mother understood the economic limitations of pursuing a life in the arts and encouraged Bernal to pursue a degree in medicine. Bernal moved Mexico City and enrolled in the National Autonomous University. He lived with close relatives who took him in and helped him land a job as a messenger in Hacienda. Bernal left medicine after a few semesters and enrolled in art school at La Esmeralda under the tutelage of sculptor and painter Francisco Zúñiga.
Mexico City
It was during his time in Mexico City that Bernal developed a close friendship with the writer José Revueltas. In this friendship Bernal found a profound sense of camaraderie and political commitment. Revueltas was a complex thinker whose rebellious nature and understanding of Marxism put him at odds with both the leadership of the Communist Party and the cultural elites in Mexico. At the time Mexico was undergoing deep cultural shifts as the post revolutionary rhetoric utilized by the ruling party (PRI) to legitimize its agenda of economic development, clashed wit the cultural values of the younger generations. Bernal became actively involved in the student revolt of 1968, which led to the massacre at Tlateloclo Square on October 2nd, 1968. Bernal witnessed the massacre and was picked up by the army and jailed with thousands of other participants. Revueltas himself was jailed and took the blame for the actions of the student leaders who viewed him as a natural leader, but also a true revolutionary figure and uncompromising creator. Through his friendship with Revueltas, Bernal was able to support himself in a variety of editorial jobs. Bernal's first wife, Yolanda Soto Bernal, became close with the Revueltas family and the young couple were able to support themselves and bring their child into the world paying for pregnancy check ups and the delivery of their son with drawings and paintings given to the husband of one of Revuelta's daughters.
At the time, Bernal also developed a friendship with the infrarealist group, more specifically the poet Vicente Anaya and the writer Roberto Bolano. Eventually Bernal would leave his small apartment in Mexico City's Chinatown to artists associated with this group.
After the birth of their son, the young couple moved into Bernal's parent's home in Nogales, Sonora in order to stabilize economically. Driven by the fear of betraying his calling as a painter and the political turmoil still present in the country, Bernal became active in the social and cultural movement taking shape in Hermosillo, Sonora. Bernal established an exchange of ideas with a group of artists influenced by the New Left known as Los Azules. The group led a revolt at the state university and took over the campus, establishing independent workshops, reading groups, and clashing with right wing student groups. Bernal was an avid reader of neomarxist and Situationist thinkers, feeling a particular affinity for the work of Henri Lefebvre and Guy Debord as well as older works by Leon Trotsky.
.

The piece is overall in good pre-owned condition, the frame with signs of wear in places, the mat is ok