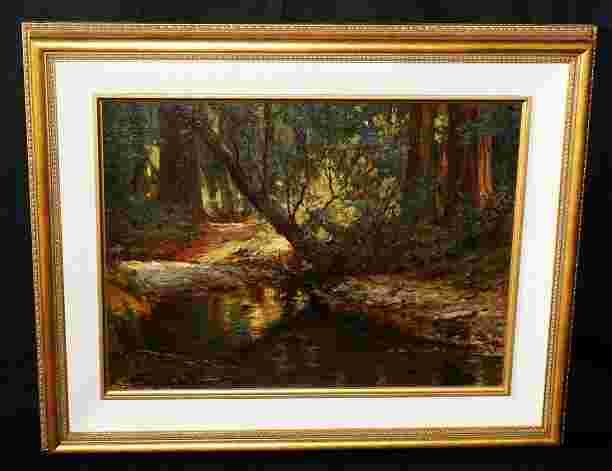 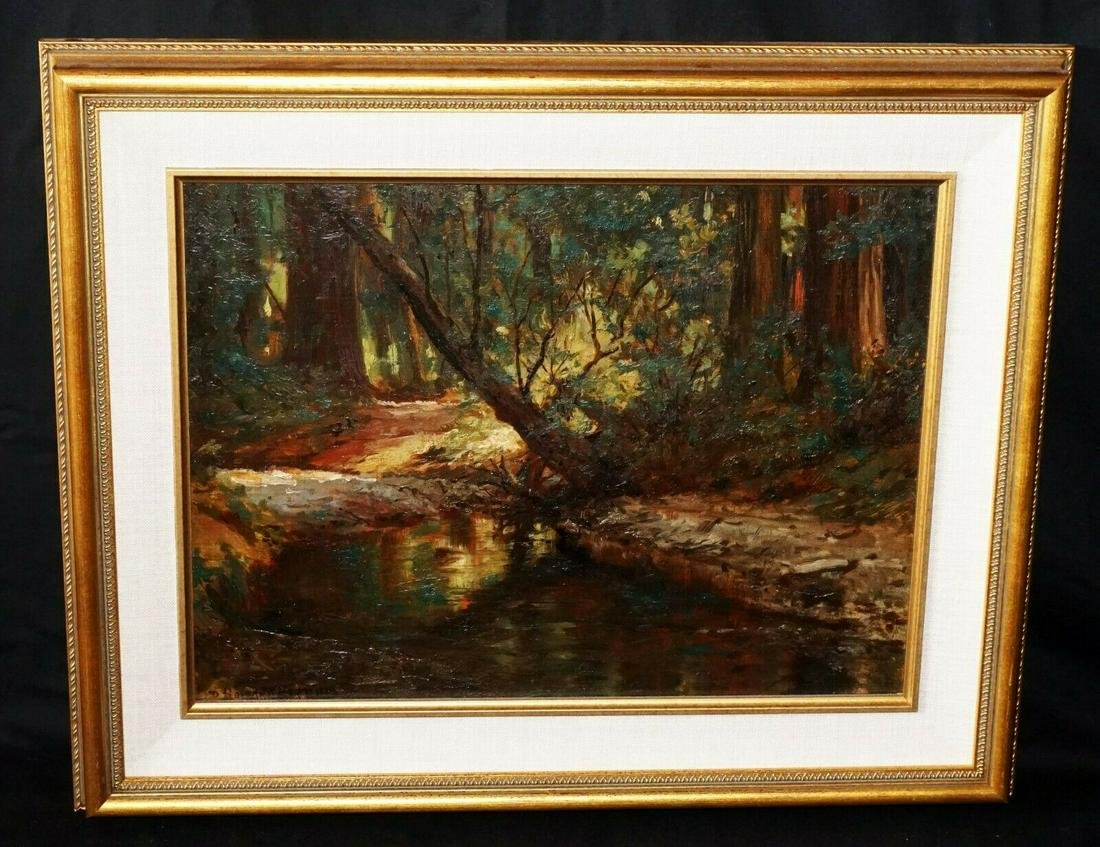 Up for sale from a local estate in Honolulu Hawaii this circa 1910 Hawaii/ California framed oil on wooden panel painting depicting a forest scene and was created by well known artist David Howard Hitchcock (1861-1943). The condition is described above for more information please check the photos. A similar painting was offered at auction with a low auction estimate of $15,000.
Measurements:
Painting 12 inches x 16 inches
Frame 17 inches x 21 inches
More about the artist:
Long regarded as one of the most important interpreters of the Hawaiian landscape, David Howard Hitchcock had a lengthy and prolific career, spanning more than sixty years. His finest period as a landscapist was from about 1905 to 1930. In addition to his paintings of volcanoes, also Hitchcock became widely known for his large dioramas and other mural-size painting of island scenes. In the early 20th century, Hitchcock was arguably Hawaii's outstanding resident professional artist.
Born in Hilo, Hawaii, he was the first Hawaii-born painter to receive formal art training in Paris. D. Howard Hitchcock did numerous paintings of volcanoes, which circulated widely enough to attract tourist attention to the islands. He depicted the volcanoes in a range of appearances, from fiery beasts to calm renderings of the landscape. During extensive travels in the 1900s, Hitchcock explored the volcanic regions of the island of Hawaii. In July 1907 he made his first visit to the island of Kauai, becoming one of the earliest artists to paint the Waimea Canyon there. He also executed dramatic views of Hawaii for display on vessels of the Inter-Island Steam Navigation Company.
Hitchcock was Jules Tavernier's disciple and principal student. He first met Tavernier in January 1885, when Tavernier made his initial trip to Hilo, Hawaii, along with landscape painter Joseph Strong (1852-1899). Hitchcock later recalled that this encounter determined the course of his life: "When I met (Tavernier) in Hilo with Joe Strong it was the first time I had ever seen a real artist. He looked at my first efforts in art and encouraged me in my work. Like a parasite I followed Tavernier and Strong to Kilauea to watch them at their painting."
Hitchcock studied drawing while a student at Punahau School in Honolulu, and received minimal instruction in painting while a student at Oberlin College in Ohio. Encouraged by Tavernier, pursued a year of study at the California School of Design with Virgil Williams in San Francisco from 1885-1886. Upon his return to Hawaii, Hitchcock opened a studio in Hilo and, later, one in Honolulu, near that of Tavernier.
Despite their friendship, Hitchcock and Tavernier occasionally became rivals, particularly in their production of the ever-popular volcano pictures. Tavernier, a frequent visitor to Hitchcock's studio, more than once began a sketch and then abandoned it with the words' 'finish that for me' a suggestion that in one case caused a tantrum that Hitchcock long remembered: 'One day someone asked me to copy a large painting of his called 'Sunset at Kilauea' which I did, and made an almost perfect copy. I signed it Jules Tavernier by H.H. and showed it to him. Greatly to my surprise he was quite furious and went off in a rage'.
Hitchcock, along with Charles Furneaux (1835-1913) and Jules Tavernier (1844-1889), were artists of much fascination to the public who visited their studios and watched closely their works-in-progress. Later this threesome was colloquially named the Volcano School, and their works had great popularity. One of Hitchcock's volcano paintings, with strong raking sunlight and clouds of blue vapor and gas rising from the pit, was purchased by John D. Spreckels of San Francisco.
In 1893, Hitchcock returned to his native Hawaii after three years of study at the Academy Julian in Paris and in New York. Interest in painting in Hawaii was revived in 1894 with his return and the founding that year of the Kilohana Art League, the first association formed specifically to encourage artists and to sponsor exhibitions of their work. Hitchcock was the driving force behind the club for most of its twenty-year existence, and was made president, a position he retained for much of that time. The first critical notice of his paintings appeared in June 1894 on the occasion of an exhibition of the Kilohana Art League. The artist was called a 'promising young painter, in the first moments of his return from France'. Hitchcock's new 'charming scenes' in a 'high key' were said to show both 'crispness and freshness' the Pacific Commercial Advertiser reviewer enthused. 'He has given us in a style peculiarly his own, some of the most subtle and brilliant effects of tropical light. There is a distinct individuality or manner in his work which in so young and artist should promise a development of style which may eventually be called his own. It is pleasing to see him strike out boldly in the treatment of scenes of his native country."
Hitchcock produced many plein-air studies, many of them small enough to fit into his paint box, such as his work 'Milolii, Hawaii, Looking South (1925), and he retained many of them for future studio use. In 1919, he helped establish the Honolulu Art Society, to support the efforts of local artists. In the late 1920s, after exposure to contemporary work in New York and Hawaii, Hitchcock attempted to modernize his treatment of the landscape. His 'new' approach was not successful, and he soon reverted to what he once described as a 'conservative-impressionistic' style.
His paintings were presented at the Alaska-Yukon Exposition in Seattle in 1907. His 15 foot 'Hanalei Bay' was exhibited as part of Hawaii's exhibit at the Panama-Pacific International Exposition in San Diego in 1915,. In his later years, Hitchcock taught painting at Punahou School. His daughter, Helen, became an artist as well. In 1936, in honor of his seventyfifth birthday, Hitchcock was given a retrospective exhibition at the Honolulu Academy of Arts. He was also a member of the Salmagundi Club. Hitchcock died in Honolulu in 1943.
.

The painting and frame are in excellent pre-owned condition,