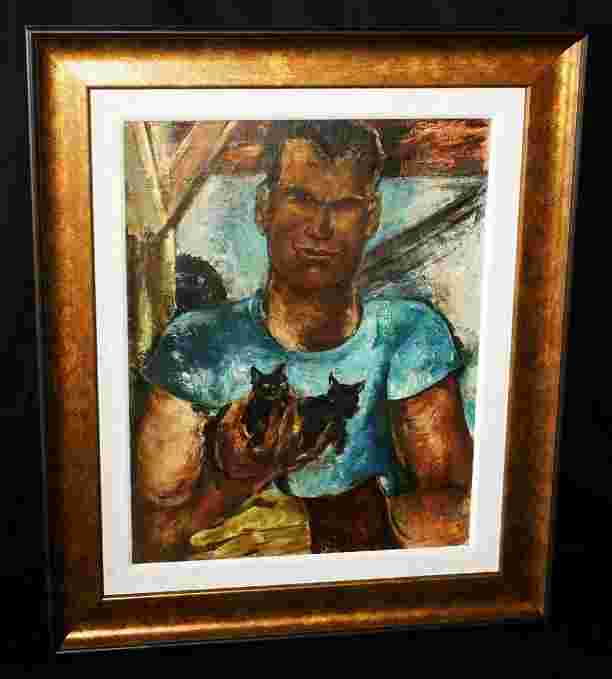 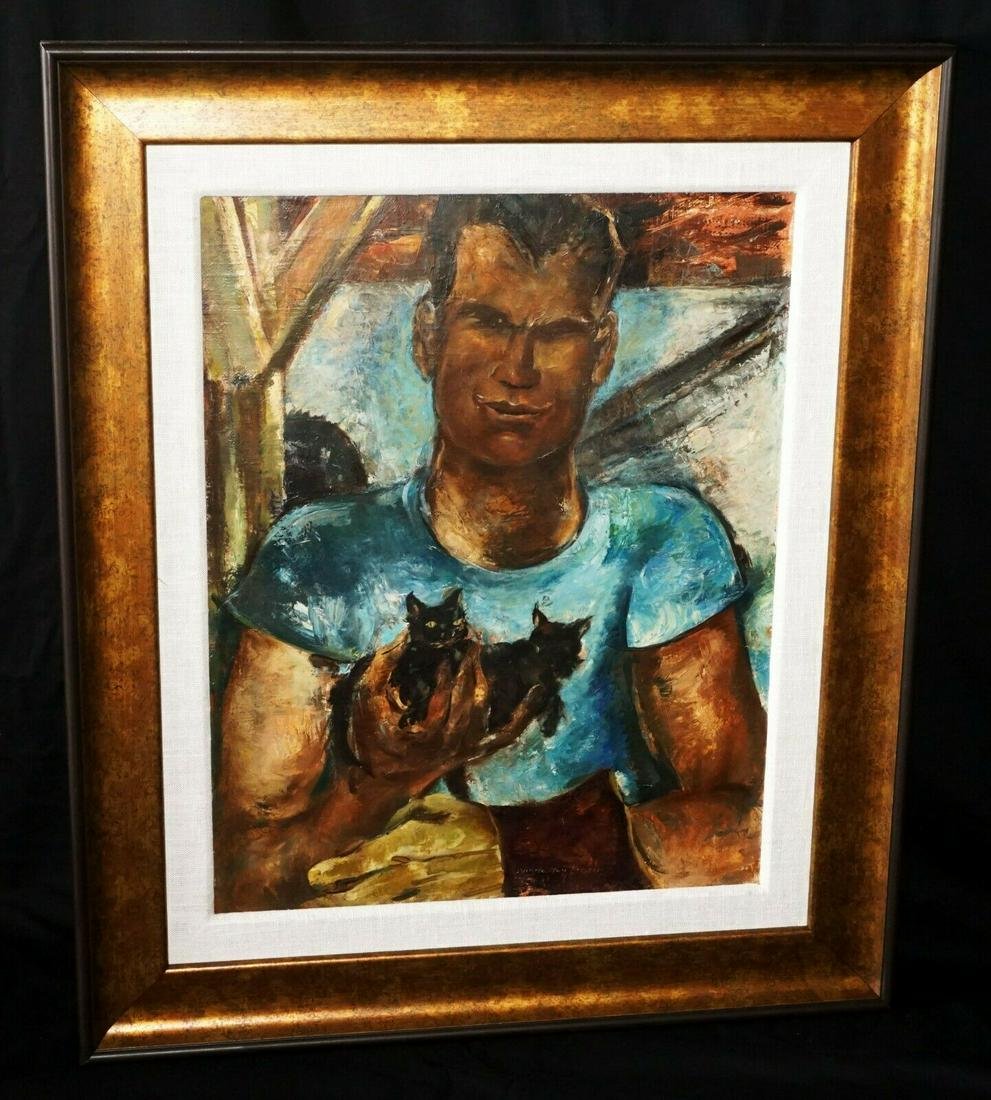 Up for sale from a local estate in Honolulu Hawaii this 1950s Hawaii framed oil on canvas painting that depicts a workman in a short sleeve shirt holding some tiny kittens in his gloved hands and was created by well known local artist Juliette May Fraser (1887-1983). The condition is described above for more information please check the photos. Local shipping will be cheaper...free local pick up possible.
Measurements:
Canvas 20.25 inches x 16 inches
Frame 27 inches x 23 inches
More about the artist:
Honolulu-born artist Juliette May Fraser is perhaps best known for the murals she painted around the world. She also portrayed Hawaiian legends and other themes through linoleum cut, oil painting, ceramic, and fresco.
Juliette May Fraser was born in 1887 in Honolulu. After graduating from Wellesley College in Massachusetts, she worked as an educator, like her mother and father who had come to the islands to teach. "That was practically the only thing a woman could do then," she told an interviewer a few years before her death in 1983. But her heart since childhood had been captured by art, so she saved her salary to study at the Art Students League in New York.
She returned to Honolulu, teaching for a few more years before receiving a commission to paint a mural for Mrs. Charles Adams, grandmother of Ben Dillingham. That started her on a lifelong path of painting murals, from the World's Fair in San Francisco to Ipapandi Chapel on Chios Island, Greece, where her work was so beloved that the chapel's street was named after her.
Fraser's work wasn't flashy. In fact, critics sometimes described her art as "deceptively simple". A tiny woman, remembered by many for a mischievous glint in her eyes, the unassuming artist often dressed in a palaka shirt and slacks she sewed herself.
The work of kama'aina (Hawaii born) Juliette May Fraser, can today be found in many Hawaii public buildings. In the Hawaii State Library, Fraser executed in 1934-35 a series of murals based on the legends of Hawaii. In 1934, Fraser was invited to create a work of art for a public place by the Federal Work Progress Administration and the Federal Emergency Relief Administration. The project took a year to complete. For 3 months she received $35 a week to work on the project. When the funds ran out, she continued on her own until the murals were completed. The murals, which extend from floor to ceiling, depict Hawaiian legends. Additional panels in the room display various marine life and Hawaii flora and fauna. The murals were unveiled on March 14, 1935 to the general public.
At the University of Hawaii in Honolulu, Fraser's fresco 'Air', ( 1953) is the largest and most complex of the frescoes in Bilger Hall, and depicts the land-linked culture that sustained early Hawaiian people. Makahiki Ho'okupu (Harvest Celebration) was created by Fraser in 1938 for the Hawaii pavilion at the San Francisco World's Fair. The 50-foot charcoal and sanguine mural (on 13 masonite panels) depicting harvest and gift-giving ceremony remained in storage until 1980, when it was rededicated and placed in Hamilton Library on the artist's 93rd birthday.
Fraser is also noted for her printworks, and was associated with Honolulu Printmakers, which is said to be the oldest continuously active printmaking organization in the United States. The group was founded in 1928 by a group of local artists in an effort to encourage the art of printmaking in Hawaii. Each year, one of the organization's members is selected to create a special print. Along with Juliette May Fraser, some of the printmakers of yesteryear - John Melville Kelly, Huc-Mazelet Luquiens, Cornelia Macintyre Foley, Isami Doi, Madge Tennant, Jean Charlot, John Young and others - became world-renowned artists, their prints now demanding much higher sums than the original $5 price.
Fraser's work now hangs in museums around the world, including the Honolulu Academy of Art.
.

The painting and frame are in excellent condition,

32,426 Followers
Get notifications from your favorite auctioneers.
Jasper52 online auctions by: