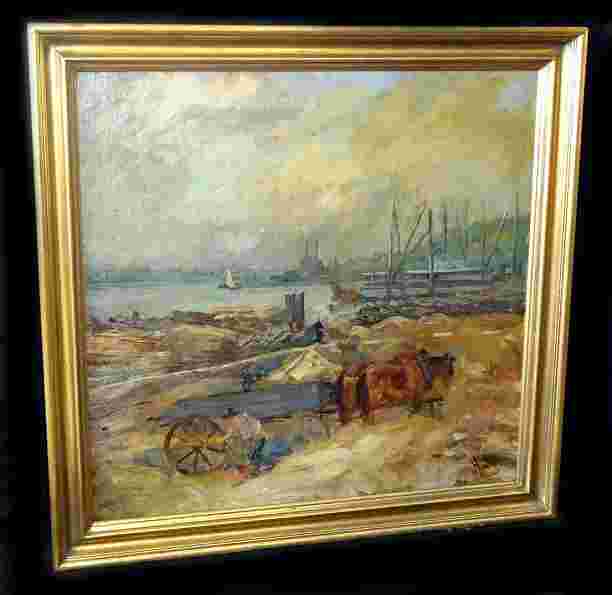 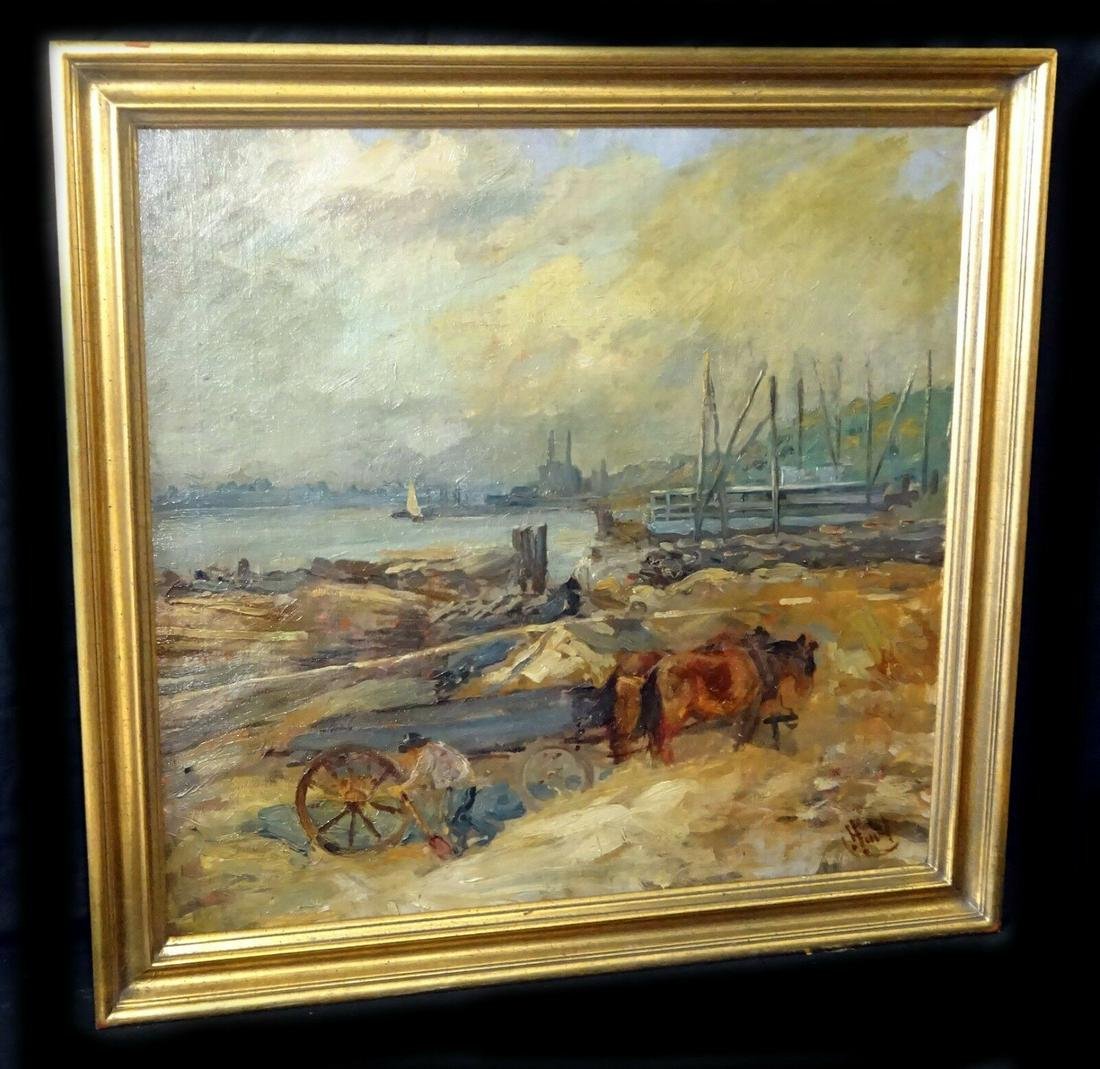 Up for sale from a recent estate in Honolulu Hawaii, this 1910s US oil on canvas painting that is titled "Wagon on the Riverbank" by well known artist George Overbury (Pop) Hart (1868-1933).
The condition is described above - for more details please check the photos.
Provenance information: Acquired at Freeman’s Auction, Philadelphia.

Measurements:
Canvas 25 inches x 26 inches
Frame 29 inches x 30 inches
More about the artist:
George Overbury "Pop" Hart, Painter, etcher, born in Cairo, IL, May 10, 1868. Hart grew up in a household in which several of his older siblings were artists. This association created in Hart an early love for art. Early in his career, he was a sign painter for amusement parks in New York City. Although many writers have perpetuated the myth that Pop Hart was a self-taught artist, he was quite the contrary. In fact Hart had more training than some of the better known artists of his time. He studied at the Art Institute of Chicago for three years from 1894-1897 and briefly at the Academie Julian in Paris in 1907.
During the first two decades of the twentieth century, Hart was also a central figure in the Fort Lee, New Jersey artists' colony and counted among his close friends such important artists as Jules Pascin, Walt Kuhn, Edward Hopper and Arthur B. Davies. He also created stage sets for motion picture studios during his stay in the Fort Lee artists' colony. During this time Hart was also associated with different members of the New York Social Realist group of artists that included Robert Henri, John Sloan and others. His schooling and association with these eminent artists provided him with the solid foundation that became evident in his art.
Little known today, Hart was a frequent traveler who visited such far away exotic lands as North Africa, Tahiti, the West Indies and Mexico. Hart's favorite choice of medium, watercolor, was well suited to his preference to paint en plein air (on the spot) in a spontaneous, free-flowing style. In Fact William H. Gerdts noted that Hart had "a realistic sometimes reportorial style. Hart was perhaps America's finest watercolorist combining brilliant draftsmanship with broad free-flowing washes of color." While Hart experimented with Impressionism, Post Impressionism, Modernism, Social Realism and other aesthetics, his stylistic approach was both innovative and progressive.
In 1921, he began printmaking, working in drypoint, lithographs, and etching. He prized spontaneity in his work, and while few may associate graphic work such as printmaking as being spontaneous, Hart was able to capture the moment within these works by his bold contrast of lights and darks and his simplified use of lines. Of all the styles and mediums Hart chose to employ, none were more innovative and fresher than his work in watercolor. "Hart used a fairly radical method of layering paint in loose, watery strokes, allowing his passages to drip and blend together in an accidental manner. During his own day, Hart, along with John Marin and Charles Burchfield was regarded as a leading figure in American Watercolor."
Some of Hart's work reflects the influence of the renowned artist Maurice Brazil Prendergast in its addition of bold color, form and subject matter. Like Prendergast Hart painted people partaking in leisurely strolls along beaches enjoying the everyday goings on that life had to offer. No doubt these scenes were of keen interest to Hart who had a studio along the beach front of Coytesville, New Jersey. He was also known for genre, portraits, landscapes, markets, horsemen, Arabs and rivers.
He was a member of the American Watercolor Society; New York Watercolor Club; Brooklyn Society of Etchers; Salons of America; Society of Independent Artists and others. He won various awards including Etching prize, Brooklyn Society of Etchers, 1923-1924; first prize, watercolor, Palisade Art Association, Englewood, NJ, 1924; bronze medal, Sesquicentennial Exposition, Philadelphia, 1926 and others. His work can also be found in major museums in the United States and abroad. A bust of him by Reuben Nakian is in the Museum of Modern Art in New York City donated as a gift compliments of Mrs. John D. Rockefeller, Jr. He died in New York City in 1933.
.

The painting is in in good unrestored condition, with some surface darkening, in a decent frame,