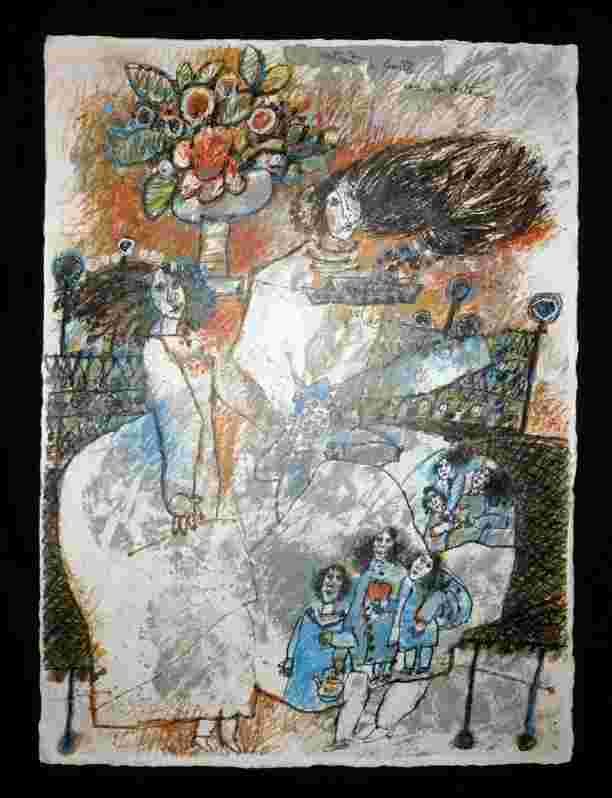 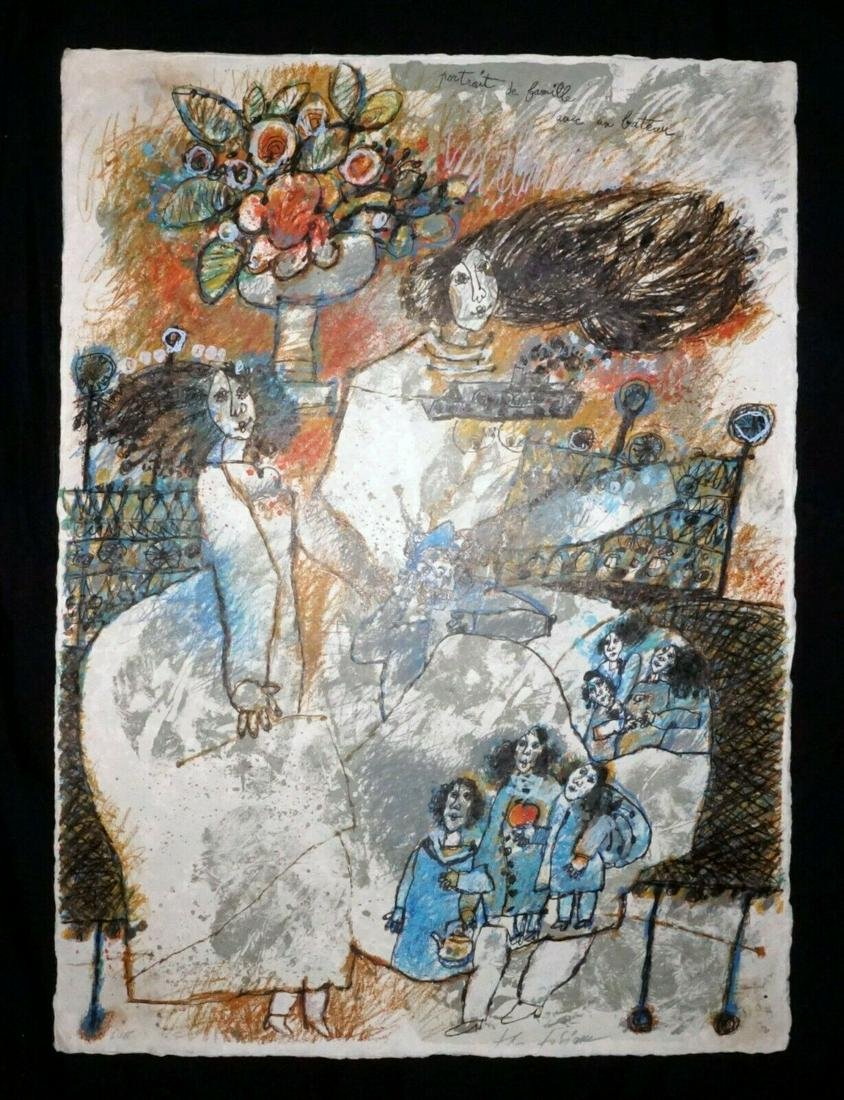 Up for sale from a local estate in Honolulu Hawaii this 1978 French/Israeli large sized limited edition 6/175 color lithograph print that is titled Portrait de Famille avec un Bateau and was created by the well known artist Theo Tobiasse (1927-2012). The condition is described above for more information please check the photos. The item will be rolled up and shipped in a mailing tube.
Measurements:
Print 30 inches x 22.5 inches
More about the artist:
Theo Tobiasse was born in Israel of Lithuanian parents. Before he turned seven, his family moved to Paris due to financial difficulties. In Paris, he felt like a fish out of water. He didn't quite fit in.
Between the years of 1942 and 1944, the Germans occupied Paris. He and his family were forced to live in solitary confinement with the constant fear of being discovered. The only things that kept Tobiasse sane were his books and his drawings. By the time it was safe to come out of hiding, he had quite a portfolio put together.
He attributes his works to his real-life experiences. He believes that because of these experiences, he has reached a place of perfect contentment and harmony. This is apparent in his works through the use of colors and textures.
In 1950 he moved to Nice where he continued to paint. He had his first
exhibition at the Palais de le Mediterranee in 1961 where he also won the grand prize. This helped him to make the decision to quit his other career and devote his time entirely to art.
In 1960, his work was noticed at an exhibition of young artists at the Palais de la Mediterranee in Nice and he won first prize. From then on art galleries and collectors continued to show interest in his work, and by 1962 Theo Tobiasse was finally able to devote himself entirely to painting. In 1970, he moved into his studio on Quai Rauba-Capeu, overlooking the Port of Nice. In 1976 he moved again to St. Paul-de-Vence where he rediscovered both the sky of Jerusalem and that of Florence.
It was in Nice, the city he had adopted on leaving Paris, that his pictorial expression came into its own. Initially profane and close to certain bestiaries, his subjects rapidly evolved towards reminiscences about his childhood: buses that he had caught sight of on his journey to France, boats with wheels on the Nieman in Lithuania, tea kettles, the warmth of the fireside, the trains when he arrived in Paris at dawn, the smokiness of railway stations, etc.
All of these symbols were combined, quite extraordinarily, with Biblical or erotic fantasies and also with the theme of exile which had become his main interest over the previous few years. Often visible in his more recent work, the theme of exile took on a more dramatic dimension when it began to encompass not only past and present exiles, but the fear of exiles still to come. This background subject, currently his main preoccupation, is woven out of women, children, crowds, but also candelabra, which represent the glow of hope.
Since 1980, Theo Tobiasse has travelled a great deal in the United States. On a detour, via Mexico, he discovered the impressive Aztec sites of the Yucatan, whose sculptures and engraved stones left their mark on him for a certain period. Fascinated by New York, he decided to find a place where he could work for several months every year.
Thus, he now divides his time between St. Paul-de-Vence and New York. Many exhibitions and one-man shows have been held throughout the world, providing milestones for his work that is to be found in the catalogues of many International museums. Theo Tobiasse has created monumental works such as the fountain entitled "L'Enfant fou" for the Arenas Business Centre at Nice Airport, and stained-glass windows for various institutions in Strasbourg and Nice. He also designed costumes and stage-set models for Bernard Shaw's "Pygmalion". He has filled many sketchbooks, some of which have been published, and created illustrated works for lovers of fine books, plus etchings and engravings. Theo Tobiasse also discovered a passion for ceramics, producing pottery and dishes, as well as a series of small bronze sculptures. Several monographs have been published on Theo Tobiasse's work.
His works have been on exhibition throughout the western world and Japan.
Tobiasse has also worked in etching, lithography and many more mediums.
.

The print was taken out of the frame and is in good acceptable pre-owned condition, the verso with mounting tape and toning, the front with minor dark stains from the glue of the mounting tape, some toning, can be cleaned

31,419 Followers
Get notifications from your favorite auctioneers.
Jasper52 online auctions by: