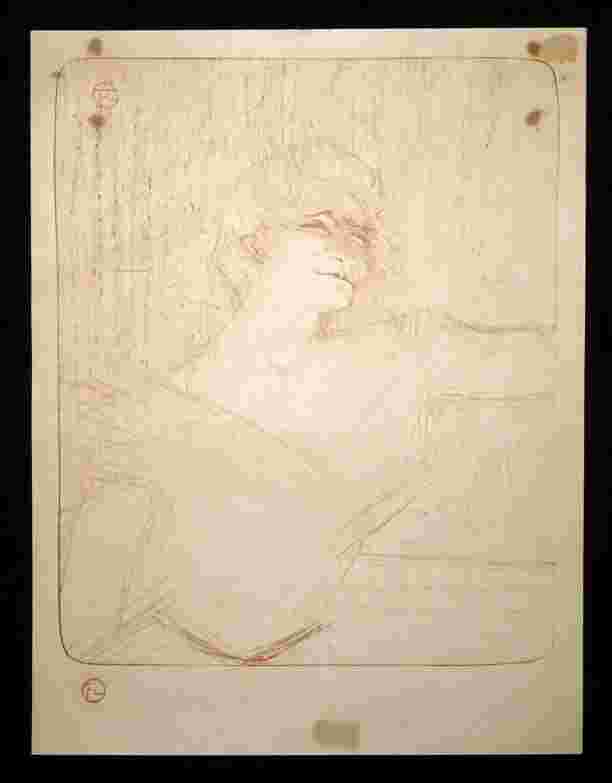 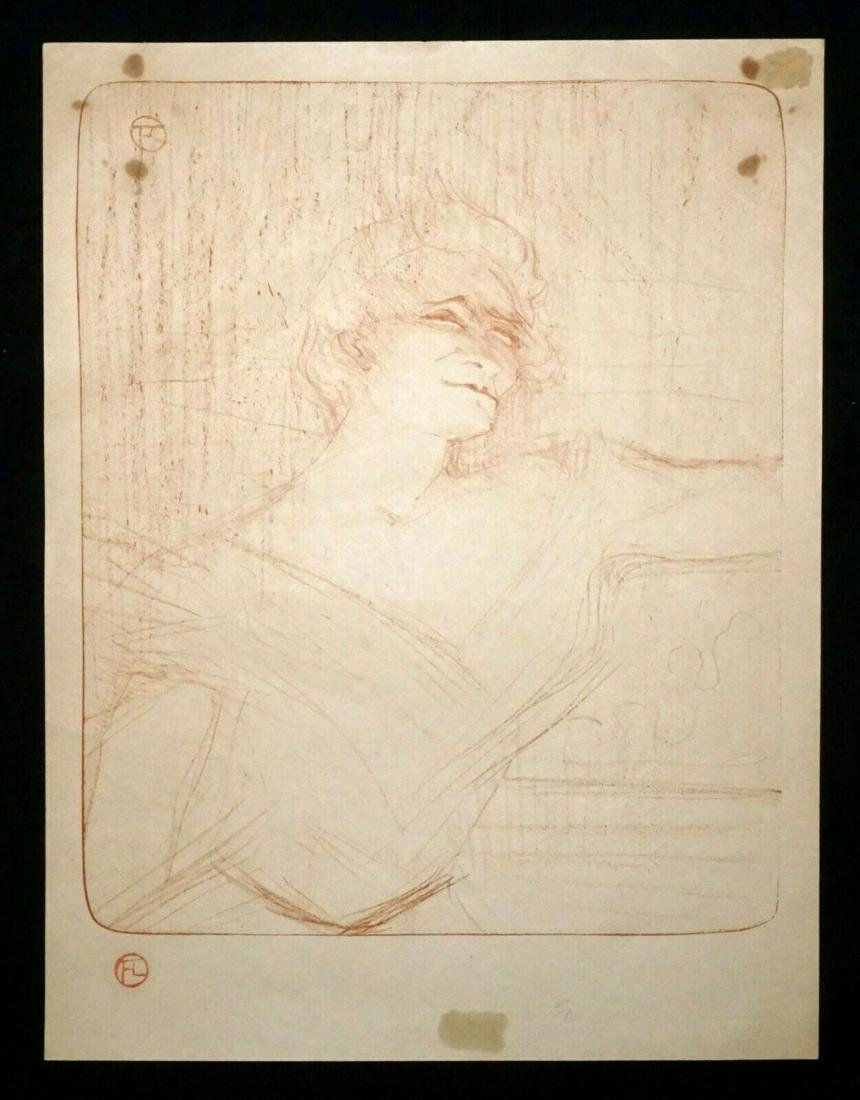 Up for sale from a local estate in Honolulu Hawaii this 1898 French limited edition 67/82 red lithograph print by Henri de Toulouse-Lautrec titled Dans la Glu, from 1898 Original crayon-drawn lithograph in sanguine/brown ink. 1898. Signed with the red monogram stamp and also with the monogram in the stone. Commissioned 1898 by Sands, London for the series: Yvette Guilbert. This impression from the edition of 82 impressions issued by the Leicester Gallery, London 1930. (The stone is now in the Lautrec museum, Albi). Ref: Wittrock - T-Lautrec Prints no 273. Adriani-Lautrec 252. Very fine strong impression in the sanguine ink showing the stone border line. On pale cream japan-type paper. With the publisher's blind-stamp. Full margins. Sheet: 13 3/4 x 10 1/2ins (350x266mm). Image: 11 5/8 x 9 1/2ins (295x240mm). The condition is described above for more information please check the photos.
Measurements:
Image 11.5 inches x 9.5 inches
More about the artist:
Henri Toulouse-Lautrec became one of France's most prominent Post-Impressionist painters and capturing the night life of part of the city, was described as "the soul of Montmartre." He also did a number of illustrations for the magazine Le Rire during the 1890s's.
Toulouse-Lautrec was born in Albi, France, in the mid-Pyranees region. He was the first child of a Count and Countess whose aristocratic lineage dated back over a thousand years but whose fortune had collapsed before he was born. At birth, they gave him the full name of Henri Marie Raymond de Toulouse-Lautrec Monfa. The parents were first cousins, and credited to inbreeding were the many birth defects that Henri suffered including an osteoporosis condition that left him with weak bones that did not heal properly when his legs were fractured when he was ages 13 and 14. In adulthood, he was only four feet and six inches in height, although his torso was fully developed. Growing up, he was unable to participate in normal activities, so he turned to art expression.
Toulouse-Lautrec moved to Paris in 1882 in order to learn from artists by working with them in their studios. He was especially impressed with Impressionist painter and sculptor Edgar Degas. Lautrec's subjects were primarily the bohemian world of Montmartre, the city's quarter where he lived and the area that had a mix that included starving' artists, actors, actresses, singers and dancers such as La Goulue who created the Can Can and performed at the Moulin Rouge. It was also the location of racetracks, dancehalls and many bars and brothels, likely the places where he, a frequent visitor, got the syphilis that along with excessive alcohal consumption added to his health problems and caused his death. He partied and sketched the nightlife, and in the daytime, converted his sketches into paintings and lithographs.
Shortly before he died on September 9, 1901at the age of 36, he was put in a sanatorium after his highly protective mother was unable to keep him at home. He is buried in Malromé at his family's estate, and he is buried in Verdelais, Gironde, close to his death place. The Comtesse Adéle Toulouse-Lautrec, his mother, and his dealer, Maurice Joyant, worked hard after his death to keep his name alive and promote his artwork. Because of their efforts, a museum in Albi was built in his honor. Two movies titled Moulin Rouge are about his life.

The item is in acceptable/good pre-owned condition, it is evenly toned throughout but have as you can see in the photos glue stains from the mounting tape in the upper and lower end of the print, the paper is not brittle both pieces with edition numbers, the pieces did not photograph well they look better in person

32,456 Followers
Get notifications from your favorite auctioneers.
Jasper52 online auctions by: