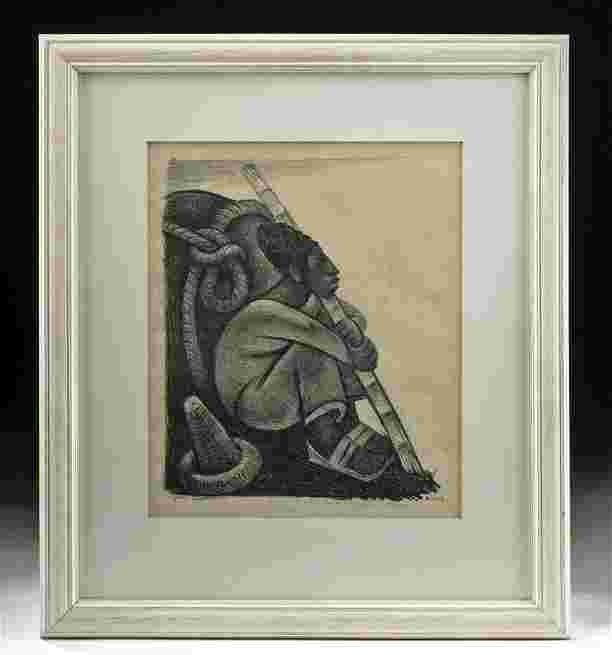 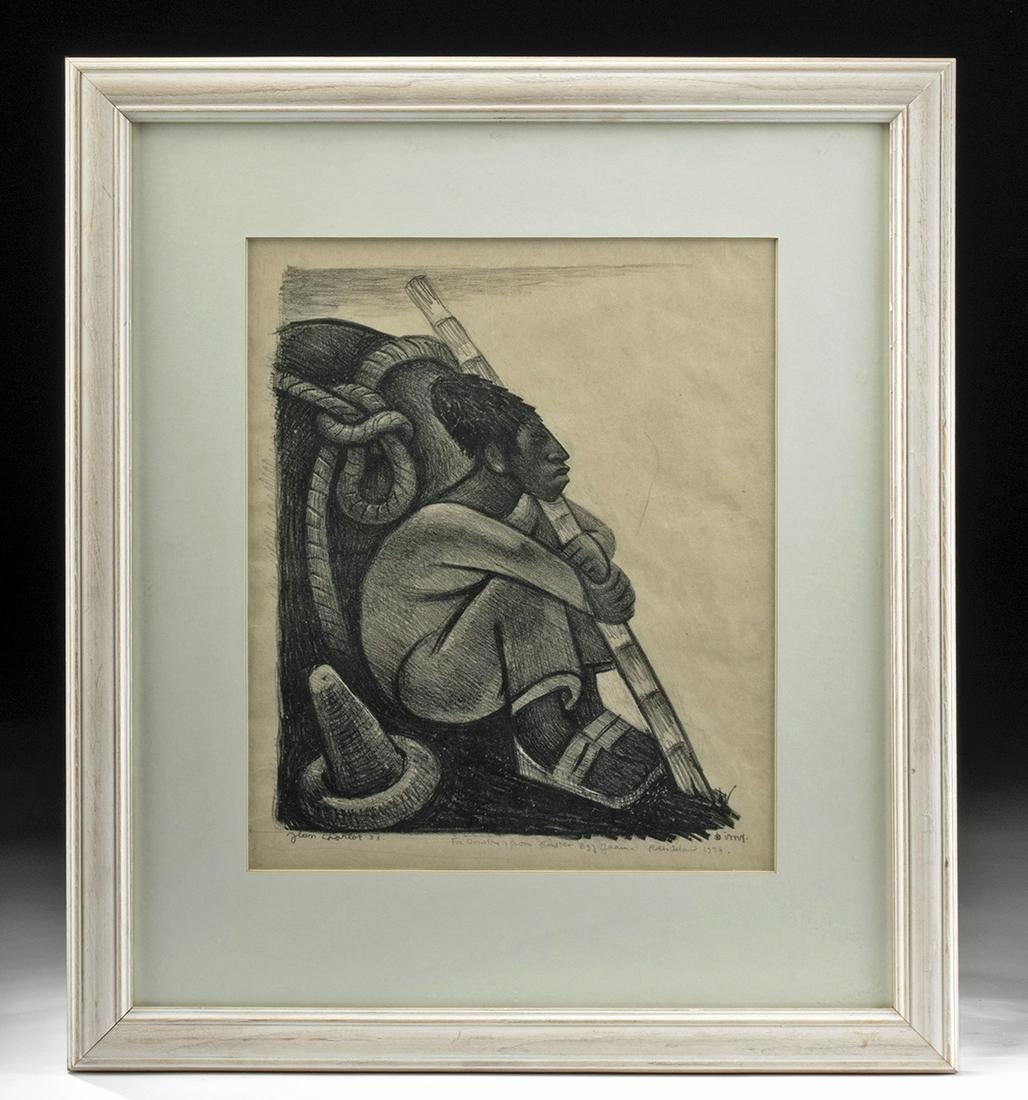 Jean Charlot (also Louis Henri Jean Charlot, French, naturalized American, active in Mexico, 1898-1979). "Cargador at Rest" lithograph, 1933. Signed and dated in the plate at lower left. Handwritten inscription in pencil by the artist that reads, "For Dorothy from Easter Egg Jean / Rock Island / 1934". A strong impression of an early composition by Jean Charlot, signed and dated in the plate at the lower left, but also featuring a handwritten inscription to his future wife. Charlot has depicted a cargador - a worker tasked with carrying heavy loads - who is taking a rest from his daily work. He sits in profile, his back hunched a tad, his huge pack behind, holding a walking stick, and his sun hat removed and placed beside him. Charlot subscribed to the Mexican pride in indigenismo and faithfully depicted the Maya and other indigenous Mexican peoples. His signature style favored bold geometrical forms and the abstraction of the human figure popularly featured by the Mexican Muralists. Size: 12.375" L x 10.375" W (31.4 cm x 26.4 cm); frame 20" L x 17.5" W (50.8 cm x 44.4 cm)

It bears repeating that this piece has a handwritten inscription in pencil "For Dorothy from Easter Egg Jean / Rock Island / 1934". The addressee is most likely Charlot's future wife, Dorothy Zohmah Day, who he met in 1931 and would marry in May 1939.

Born in Paris to a Russian emigre father and a mother whose family originated in Mexico City, with a grandfather who was French-Indian mestizo, Charlot moved to Mexico City in 1920 when his mother returned. Joining Diego Rivera and Jose Clemente Orozco, Charlot painted frescoes for the Mexican government during the rise of the Mexican Modernist mural movement. In addition, he was hired as a staff artist for a Carnegie Institute archaeological expedition in the Yucatan. In 1929, Charlot moved to the United States, as was popular with many of the Mexican Modernists, and taught at various institutions: Art Students League in New York City, Colorado Springs Fine Art Center, University of Georgia, and the University of Hawaii.

All items legal to buy/sell under U.S. Statute covering cultural patrimony Code 2600, CHAPTER 14, and are guaranteed to be as described or your money back.

A Certificate of Authenticity will accompany all winning bids.

We ship worldwide to most countries and handle all shipping in-house for your convenience.

Signed and dated in the plate, but this piece also has a handwritten inscription in pencil "For Dorothy from Easter Egg Jean / Rock Island / 1934". The addressee may be Charlot's future wife, Dorothy Zohman, who he met in 1931. Has not been examined outside the frame but appears to be in excellent condition.

4,846 Followers
Get notifications from your favorite auctioneers.
Jasper52 online auctions by: