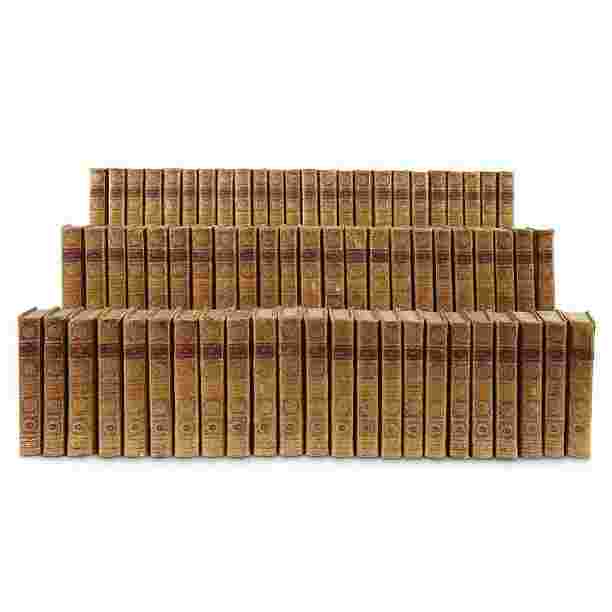 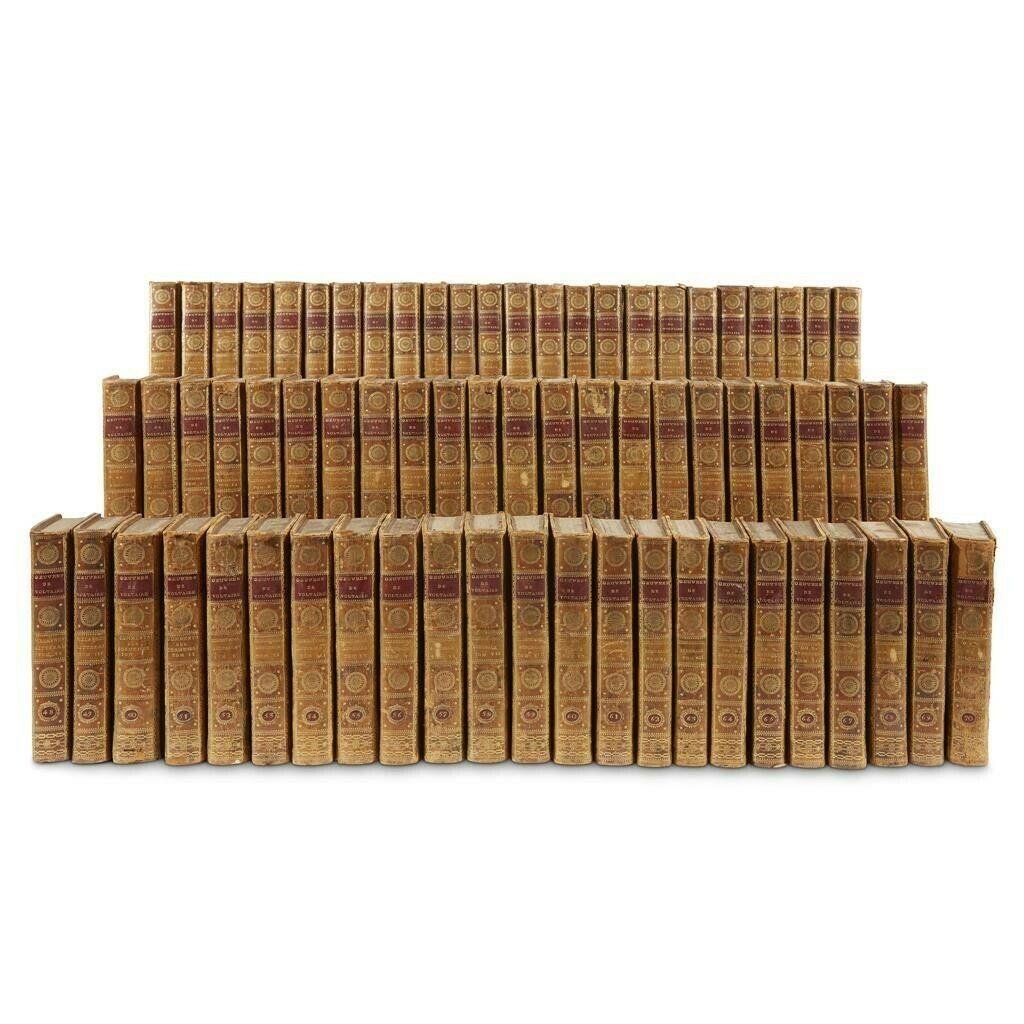 OEUVRES COMPLETES DE VOLTAIRE
[Kehl]: de l'imprimerie de la Société littéraire-typographique, 1785-1789.
In seventy volumes.
8vo.
With 3 engraved portraits, including the frontispiece portrait in the first volume, 15 engraved plates, including the battle plan in the 24th volume, and the 14 plates at the rear of the 31st volume (relating to Isaac Newton).
With all half-titles and part-titles. Contemporary full marbled calf, gilt-medallion spine compartments, red morocco spine labels, marbled endpapers, marbled edges.
Very good condition, minor wear of the bindings.
All spine bands intact, and overall a sound attractive set of bindings with all joints holding strongly.
Light foxing. Ex-library with book-plates on front paste-downs.
Provenance: The Collection of Ambassador and Mrs. Alexander Weddell, Richmond, Virginia.
Deaccessioned by The Virginia House Museum to benefit future preservation, acquisitions, and care of collections.
Famous first posthumous collected edition of Voltaire's [1694-1778] works known as the 'Kehl Voltaire', produced by Beaumarchais, who created a print foundry at Kehl to carry out this great work. 70 volumeS 8vo edition.
Volumes 1 to 69 containing all the works and massive correspondences of Voltaire.
Volume 70 contains Condorcet's Life of Voltaire and Condorcet's 'Memoires' of Voltaire, index, and 'Additions et Corrections' to the 70 volumes.
A major cultural event of the last decade of the ancien regime, a beautiful monument to Voltaire, the greatest man that literature had produced.
Pierre-Augustin Caron de Beaumarchais led a controversial life. Playwright (The Marriage of Figaro), politician, publisher, entrepreneur, spy, supplier of munitions for the American Revolution, and an early champion of the rights of artists and intellectual property. Shortly after the death of Voltaire in 1778, Beaumarchais set out to publish Voltaire's complete works, many of which were banned in France, and vehemently condemned by the Church. Royal letters would be censored by Frederick II of Germany, Catherine II of Russia, and others. He bought the rights to most of Voltaire's many manuscripts from publisher Charles-Joseph Panckoucke in 1779. To evade censorship, printing presses were set up in the small, neutral, independant state of Baden, at Kehl.
Beaumarchais bought, with exclusivity, the complete foundry of the famous English type designer John Baskerville, for the Societe Litteraire Typographique, an organization he established to produce editions in which he was interested.
Three paper mills were purchased. While the venture proved a financial failure, Beaumarchais was instrumental in preserving many of Voltaire's later works which otherwise might have been lost. The Kehl edition was banned on French territory until 1789.

32,512 Followers
Get notifications from your favorite auctioneers.
Jasper52 online auctions by: