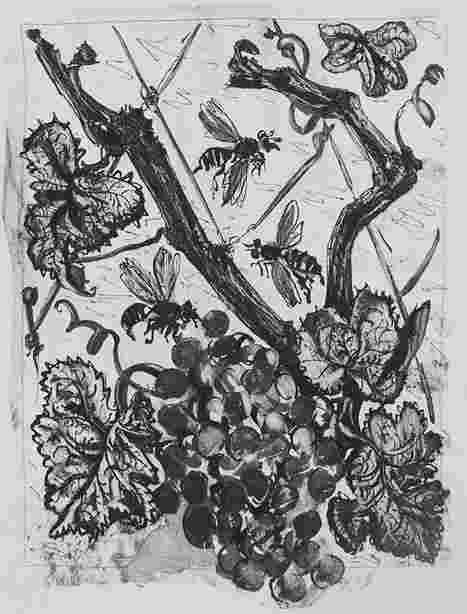 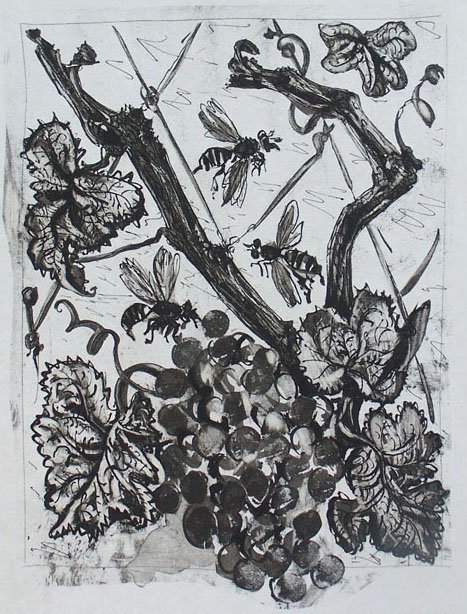 Additional Information: This is an original etching (with sugarlift aquatint) that was created by Picasso for his famous publication "Histoire Naturelle".The print was prepared in 1936 and printed in 1942 in a limited edition of 226 unsigned impressions. The work is titled in the plate "La Guepe" (The Wasp) at the lower margin. The series was printed by Roger Lacouriere and published by Martin Fabiani in 1942.

"Histoire Naturelle" is a series of 31 prints, that is considered to be among Picasso's most important graphic productions, of animals, birds, and insects. Picasso created these images in 1936 to accompany the classic natural history text by the French naturalist Georges-Louis Leclerc Buffon (1749-1788).These stunning images are of animals, birds and insects. They illustrate a series of books dating from about 1750 to 1800 called the Histoire Naturelle. The books were written by Georges-Louis Leclerc, later known as Comte de Buffon. The books describe the entire natural world.

The thirty-one prints took Picasso just a month to complete. Picasso used creatures he remembered from his childhood, and animals from the zoo and the circus. He was particularly fascinated by the pigeon, Spanish bull and cockerel. He treated each animal individually using different artistic techniques.

In 1936, Vollard commissioned Picasso for a suite of etchings to illustrate texts from the Count of Buffon's eighteenth-century text (published in 44 volumes!). Picasso, whom the printer Roger Lacouriere, had just introduced to the technique of lift-ground aquatint (which involves coating a copper plate with a sugar-water solution, working the plate with aquatint, and then soaking the plate to dissolve the sugar ground and lighten the surface of the plate) was eager to test out this new printing method, which enables the artist to work in a much wider range of grays between etchings's black and white, and produced the 31 plates. The plates were printed in 1937, but after Vollard's death in an automobile accident in 1939, they remained unpublished until Vollard's associate, Martin Fabiani, brought them out in 1942. The portfolio was published in an edition of 226 copies (including 36 copies on various papers containing a separate suite of the prints with remarques, 55 copies on Montval wove, and 135 copies on Vidalon wove watermarked "Ambroise" or "Vollard".)