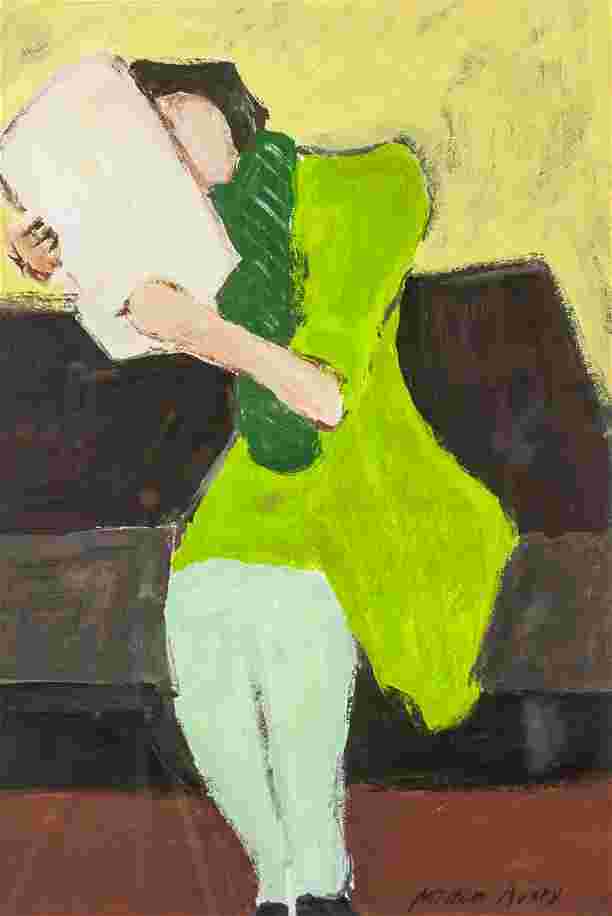 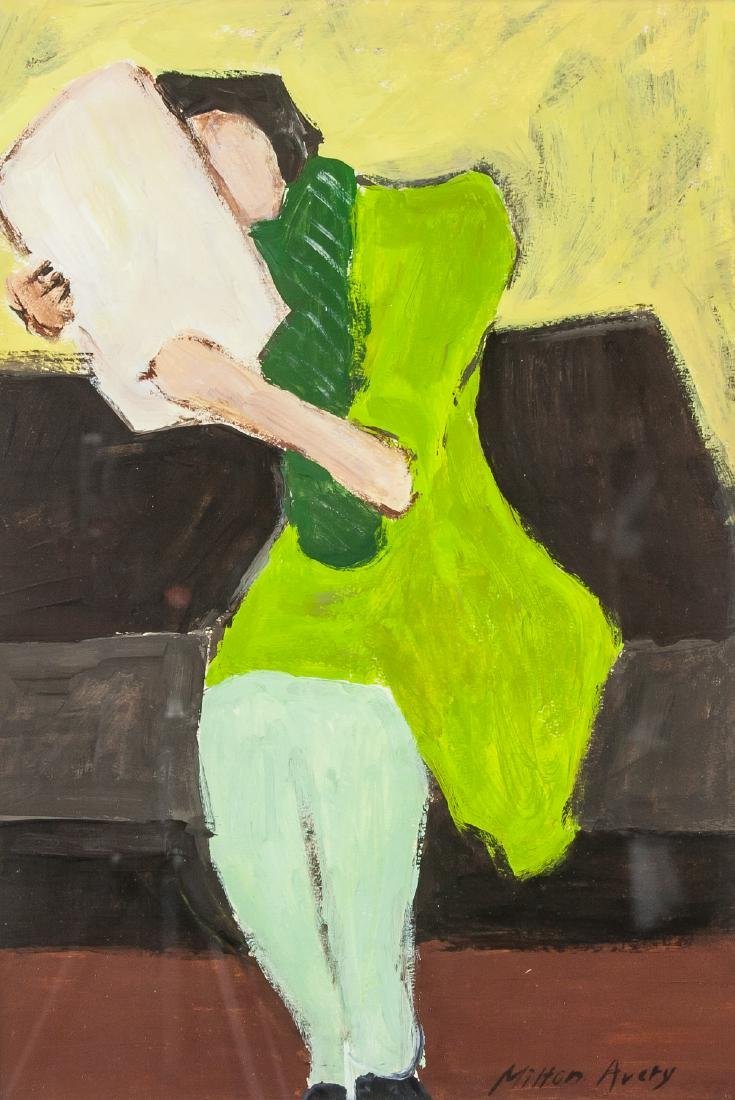 Oil on paper, framed. Featuring a portrait of a woman reading a newspaper. Signed and attr. Milton Avery (American, 1885-1965) on the lower right corner. 26 x 18 cm (10.2 x 7.1 in). Milton Avery was an American painter celebrated for his portraits, still lifes, and landscapes. Working with both oils and watercolors, he used broad swaths of luminous color and stylized forms, to capture the essence of a scene without fixating on details. â€œI try to construct a picture in which shapes, spaces, colors, form a set of unique relationships, independent of any subject matter,â€ he once said. Born on March 7, 1885 in Altmar, NY, he grew up in Connecticut and went on to attend art classes while working several jobs in Hartford. Moving to New York in 1925, his wife the artist Sally Michel Avery supported the two of them by working as a commercial illustrator in the city. Over the following years, he befriended other painters of the era, such as Mark Rothko, Adolph Gottlieb, and Barnett Newman, developing the increasingly abstract style exemplified by his late work Green Sea (1954). His paintings remained relatively unknown until 1929, when the Phillips Collection in Washington, D.C. became the first museum to purchase his work. Later in Averyâ€™s life, he often traveled to the mountains of New Hampshire and Vermont during the summer, returning to New York in the winter months. Exhibitions at the Phillips Collection and at the Whitney Museum of American Art further solidified his reputation as a seminal American artist. He died on January 3, 1965 in New York, NY at the age of 79. Today, Averyâ€™s works are held in the collections of the National Gallery of Art in Washington, D.C., the Tate Gallery in London, The Museum of Modern Art in New York, and the Los Angeles County Museum of Art, among others. PROVENANCE: Southern Ontario estate

By [Artist Name] : In our opinion, the work is by the artist.

Attributed to [Artist Name] : In our opinion, the work may be ascribed to the artist on the basis of style, but there may be some question as to actual authorship.

In the manner of [Artist Name] : In our opinion, the work was executed by an unknown hand, but was designed deliberately to emulate the style of the artist.

After [Artist Name] : In our opinion, the work was executed by an unknown hand, but is a deliberate copy of a known work by the artist.

Circle of [Artist Name] : In our opinion, a work of the period of the artist showing his influence, closely associated with the artist but not necessarily his pupil.

Follower of [Artist Name]: In our opinion, a work by a pupil or a follower of the artist (not necessarily a pupil).

American, 19th century : In our opinion, this work was executed by an unknown hand, and can only be identified by origin (i.e., region, period).

Bears signature : In our opinion, the signature on the artwork may be spurious.
Apocryphal : Of doubtful authenticity.

4,180 Followers
Get notifications from your favorite auctioneers.
Jasper52 online auctions by: