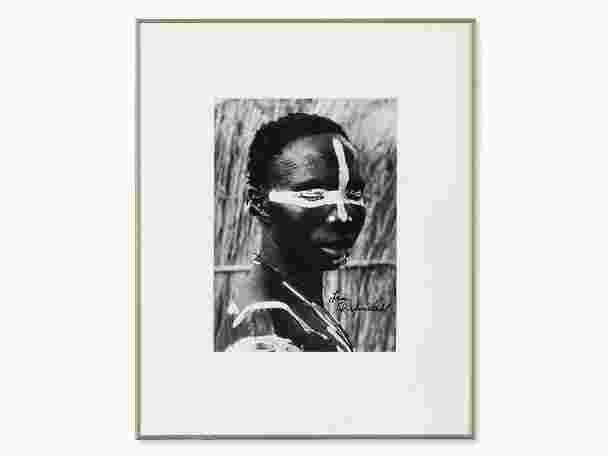 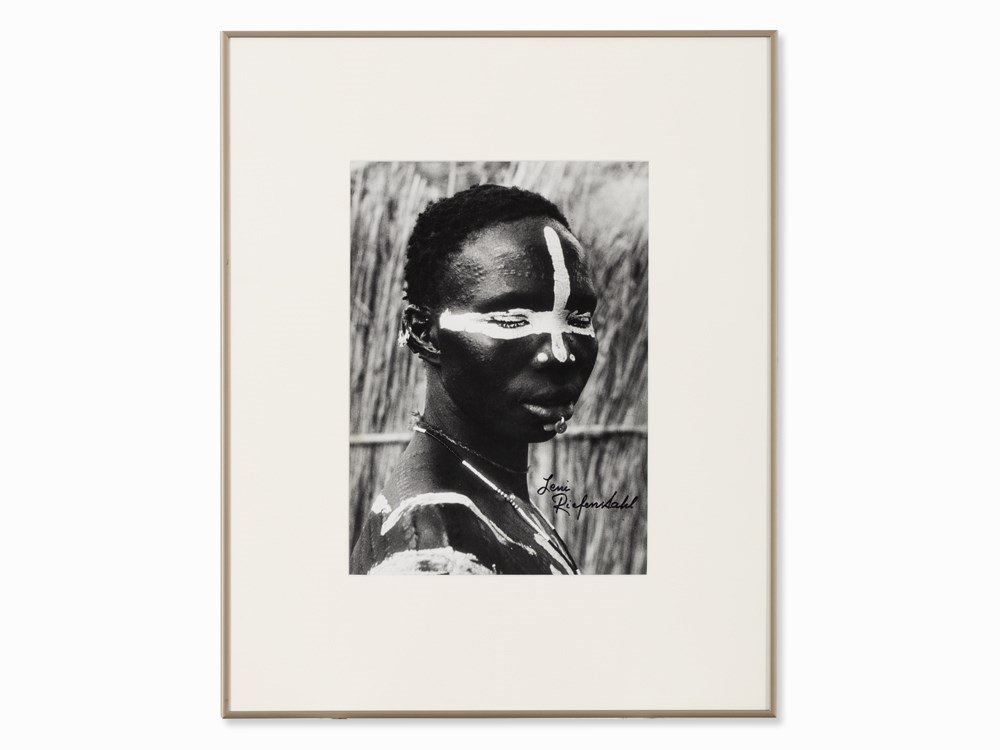 From the 1960s Leni Riefenstahl regularly undertook long journeys to a tribe of the Nuba in Sudan and photographed extensive series that have been published in magazines and books. This portrait of a Nuba man originated on one of these trips, too.

The gelatin silver print bears several partly sharp creases and faintly visible stains as well as a very short tear (ca. 1 cm) in the upper sheet edge. Inscriptions on verso slightly press through on recto. The sheet is mounted to a mat along the reverse upper edge. The overall impression is good. The frame is in good condition with minor signs of wear. The sheet-sized image measures 39 x 28.6 cm. The framed dimensions are 63.5 x 52.5 cm.

Helene ‘Leni‘ Riefenstahl was born in Berlin-Wedding. In 1918 she attended the Academy of Arts and was also trained in ballet and modern dance. Only two years later she was already active as a dancer in Germany, Switzerland and Czechoslovakia. After her first solo performance in ‘Diotima’ in 1923, it was Max Reinhardt who engaged her as a solo dancer for the Deutsche Theater in Berlin. Her career as a film actress started in 1926, when she celebrated her debut in Arnold Fanck's movie ‘Der heilige Berg’. Riefenstahl became his leading actress until she felt mature enough for her own directorial debut with the film ‘Das blaue Licht’ in 1932. Adolf Hitler was fascinated by her talent and therefore commissioned her for a number of propaganda and documentary films after the seizure of power by the National Socialists. Leni Riefenstahl was later heavily criticized for her activities under the Nazi regime, so that she decided to cease her filming in favor of photography. Riefenstahl produced large series such as her photo documentary on the Sudanese indigenous people of the ‘Nuba’, which is regarded one of her most important international successes of her later artistic output. (fea)

Auctionata charges the resale rights tax pursuant to Section 26 of the German Copyright Act (UrhG) towards the buyer in case of the sale of an original work of art or photography prior to 70 years having lapsed since the death of their creator. Therefore, Auctionata charges when purchasing a good – if a protection as an original work of art or photography is given – starting from a hammer price of EUR 400 an additional amount, which is calculated according to Section 26 (2) German Copyright Act (UrhG) and which does not exceed the amount of EUR 12,500. You can find more information about resale rights tax in Auctionata´s table of fees and T&C.