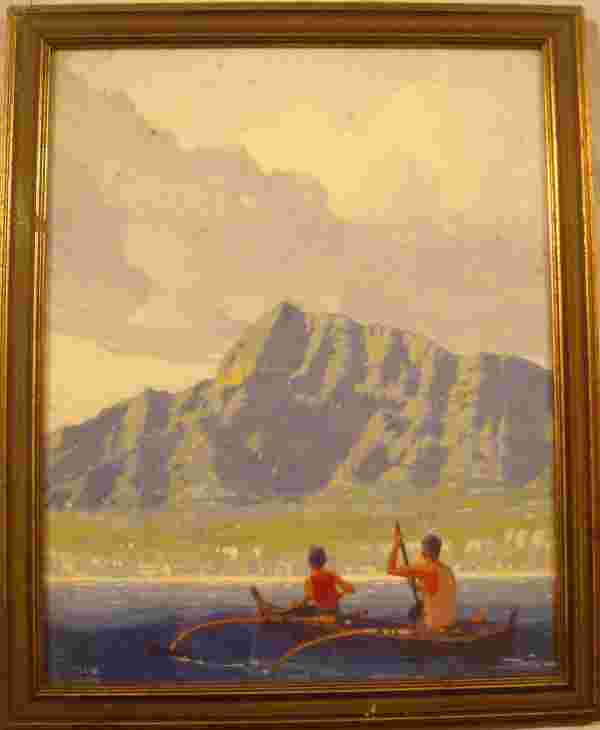 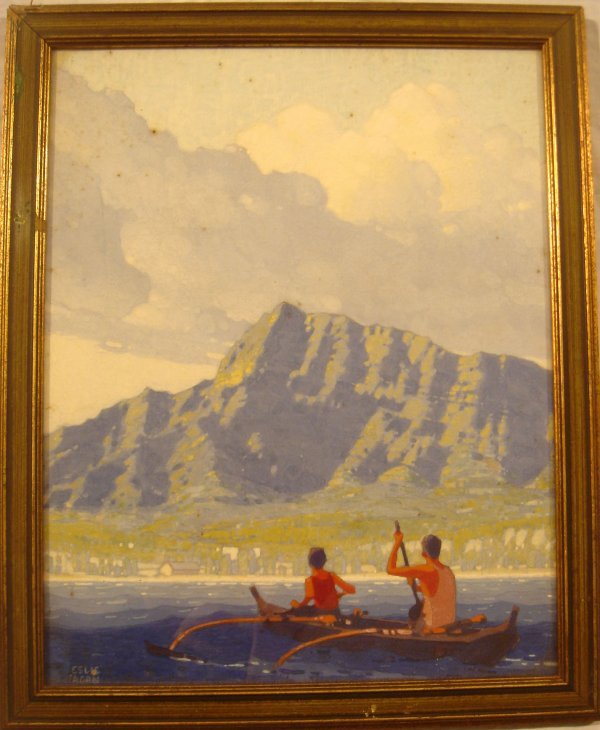 Details/Condition: This is an original painting by Ragan, which was featured as a full-page illustration in the December, 1930 issue of Holiday magazine to augment an article about Hawaii. Included with this illustration of that magazine issue, including the full-page illustration. The scene depicts two local men in a canoe with outrigger, in the foreground and Diamond Head beach in the background. The painting is signed in the lower left hand corner. The piece is housed in a period copper gilt frame and the back side bears three applied pieces of paper: a period framer's label from Buckingham's of Washington, D. C., an article about Diamond Head clipped from a newspaper or magazine, and a typed note which reads "Diamond Head – At the Entrance to Honolulu Harbor. Original painting by Leslie Ragan which appeared in a recent issue of HOLIDAY." The paper backing on the frame is original and intact, the frame has not been opened since Buckingham's prepared the piece.
Leslie Darrell Ragan was best known for his paintings of machinery (particularly trains and other railroad scenes) and buildings at heroic angles, imbued with an almost divine aura. He enshrouded trucks and locomotives with swirling steam and glowing celestial clouds. Speeding trains became works of art under Ragan's inspired vision. Ragan was born in the small town of Woodbine Iowa where there was not much for a young boy to look at except sky and clouds. He went to the Cumming School of Art in Des Moines and then to the Art Institute in Chicago. After serving in the military, he became a successful illustrator in California. His strong style soon became unmistakable. Clients were eager to see their mundane equipment or buildings transformed by Ragan's luminous vision. He specialized in travel posters and in calendars. Whether he was painting heavy mechanical structures or light airy vapor, Ragan found a way to infuse his subjects with light and enchantment. He designed posters and illustrations using opaque watercolors on Upson Board - wood panel that is found in timberyards and has a pebbled surface. The surface is fixed with denatured alcohol and gum. His design, a combination of site observation and tracings from photographs is projected upon the board with a Balopticon (a sort of sophisticated slide projector). The panel is then worked up flat on a table to allow the paint to dry without drips and run. (see Ernest Watson, Forty Illustrators and How they Work, 1946). At recent auction, one of Ragan's locomotive posters set a record at a hammer price of over $6,000.00
The colors in the painting show brightly and vividly, in signature Ragan style with his trademark billowy clouds. There is a small amount of scattered foxing and some light crazing to the surface of the paint used for the clouds. The first letters of the artist's name have smudged; it appears that sometime during handling of the picture, that corner was rubbed or temporarily had a piece of tape attached that lifted the top paint when it was removed. The frame is solid and intact with some age/wear marks. The frame measures approximately 12.5" by 15.5". Buyer pays for actual shipping and professional packing.