See Sold Price
Sell a Similar Item
Don't Miss Your Next Treasure.
Set up a search alert to hear when Paintings items arrive. 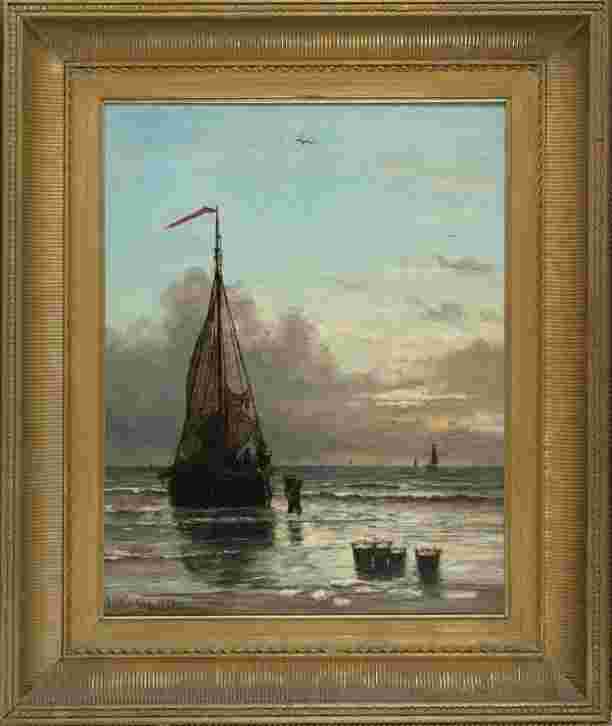 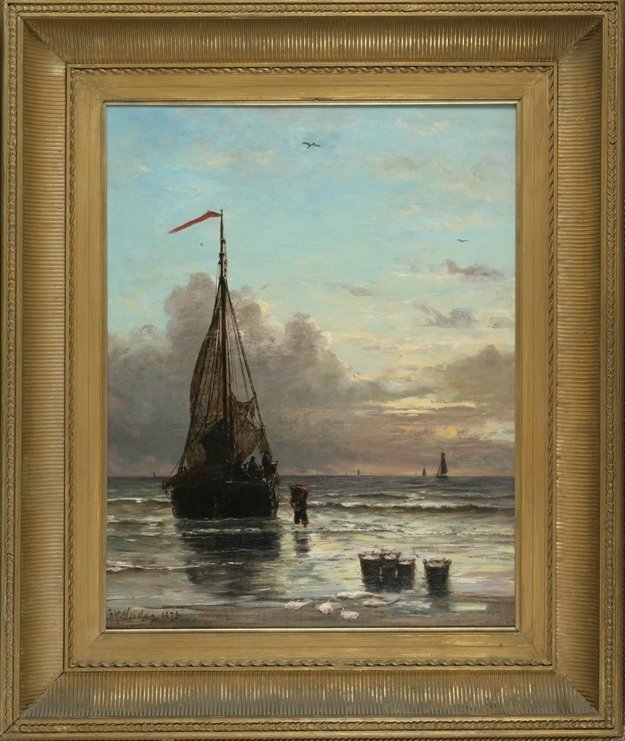 From a Direct Descendent of the Thys Family

This stunning painting by Mesdag has been a private collection for more than a century. The original owner, Edouard Pierre Albert Thys (1868-1914), was a leading citizen of Antwerp and banker during Belgium’s belle epoque before the First World War.

When Mesdag painted this work, he was leaving behind the stiff and precise brushwork characteristic of his early style and, instead, adopting the loose and daring brushwork on which his reputation rests. Importantly, “Return of the Fishing Fleet at Sunset” is related to a sketch entitled Bomschuit op het strand featured in J. Poort’s catalogue raisonné, now in the archives of Museum Vlaardingen in Holland (see illustration below). Both works are dated 1873.

Thys was a wealthy member of Belgium’s upper class at the turn of the century. Active in politics, he was president of the Liberal party as well as numerous other organizations. He led the efforts to convert Antwerp’s transportation system to electricity and to bring the Olympics to Antwerp in 1920.

In addition to his public work, Thys founded “Banque de Reports” in Antwerp when he was 32 years old, which invested in railroads in the Congo, China, Russia, and many European cities. He was also a board member of Anvers Extension, a company involved in real estate, construction materials, public work projects, and water and electrical distribution.

Among numerous residences, Thys and his wife, Helene Therese Marie Cateaux Thys (1869-1933), maintained a castle in Brasschaat and built a mansion at 91 Boulevard Leopold in Antwerp, which is now the Ridder Smidt van Gelder Museum. A photograph, taken in 1933, depicts this work hanging in the Salon Flamande of their Antwerp home (see photograph below).

According to the family, Thys and King Leopold II became trusted friends(see photograph below for a picture of the King and his daughter, Princess Clementine, walking alongside Thys). According to family tradition, the King also purchased a Mesdag at around the same time that Thys purchased this painting.

The copy of a letter dated June 17, 2014 from Jeroen Kapelle, assistant-curator of nineteenth century art at Netherlands Institute for Art History, accompanies this lot. In his letter Kapelle states “we are of the opinion that judging from the submitted photographs the painting ‘Unloading fish from a boat’ is most likely to be painted by H.W. Mesdag.”