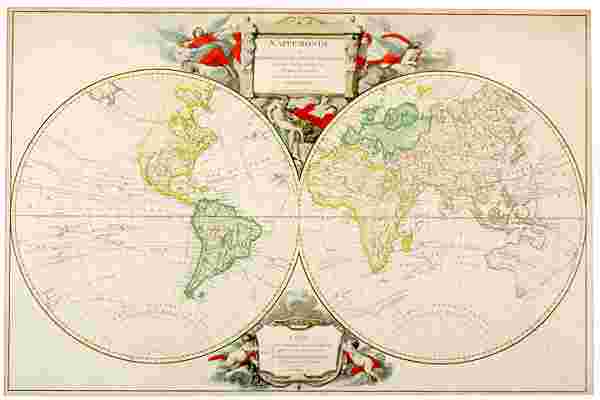 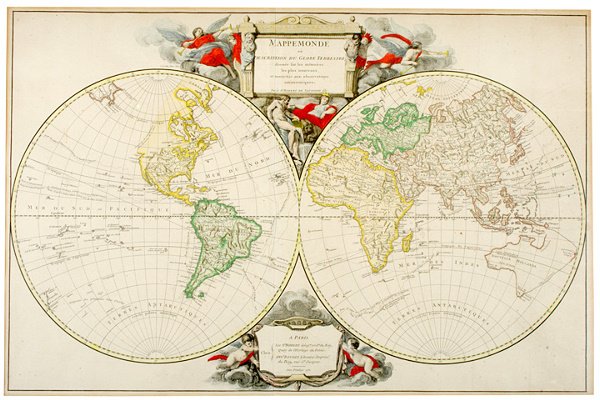 1752, World Map, “Mappe Monde au Description du Glove Terrestre,” by Robert de Vaugondy, published by Robert and Boudet in Paris, Very Rare and Choice Extremely Fine.
This wonderful engraved copperplate printed map of the world, measuring 18.5” x 28,” printed in Paris and inscribed in French, represents the world as two globes, with Europe, Asia and Africa occupying one, and North and South America occupying the other. No continent is shown in the southern regions, and the shape of Australia, which is shown connected to New Guinea and New Zealand, was uncertain, as noted on the map. The rest of the land masses are shown fairly accurately for the time, with California correctly drawn as a peninsula, but the northwest portion of North America was still a mystery. Alaska is completely missing. Based in part on the reports of explorers, this map includes the routes of various explorers, dates of discoveries, iceberg areas, and other interesting information. The map itself is hand colored in green, yellow and brown, with additional colors used for the lovely decorations around the two cartouches. This map is in choice condition and is currently matted and framed (not examined outside the frame) and ready for display.