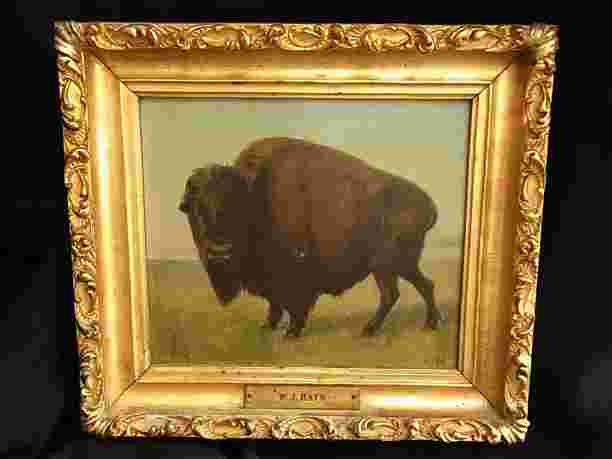 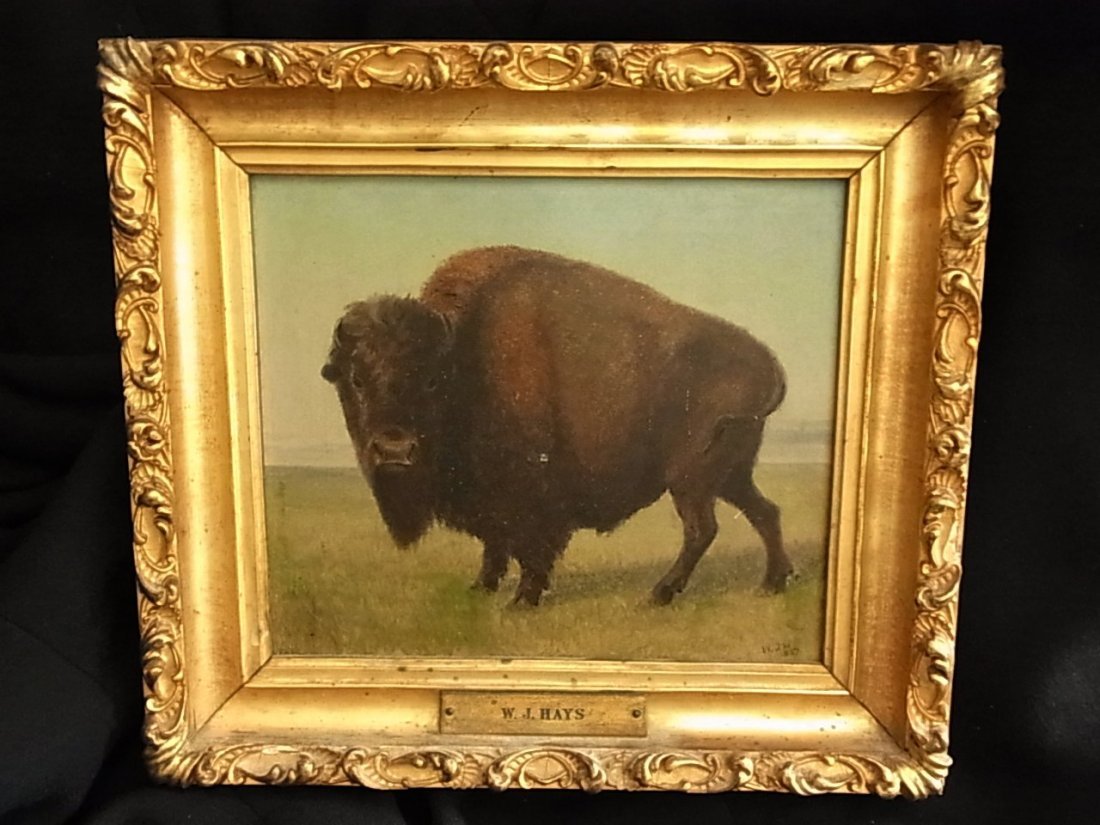 Born on August 8, 1830 in New York, NY, William Jacob Hays developed a successful career as a painter. While attending the National Academy of Design, Hays studied drawing from John Rubens Smith. His first exhibited painting at the National Academy of Design was Dogs in a Field. He went on to paint depictions of deer, race horses, game birds, fish, fruit and flowers.

Beginning in May of 1860, Hays further used his skills on a three month trip up the Missouri River to Fort Union, located in what is now the state of North Dakota. Hays sketched the flora and fauna of the American West, as well as forts and trading posts. He was also fascinated by the abundance of buffalo, as well as other wildlife of the vast prairie. Using the sketches he had gathered on his trip, Hays created several paintings in his New York studio that included buffalo. A Herd of Bison Crossing the Missouri River, in the collection of the Whitney Gallery of Western Art the Buffalo Bill Historical Center, and Herd on the Move, in the collection of the Gilcrease Museum, Tulsa, Oklahoma, both resulted from this studio time. Hays field sketches of trading posts and forts along the Missouri River are also of importance. These sketches are the only visual references known in existence that depict some of these establishments.

Hays paintings of the American West contributed to the history and knowledge of the area. As a naturalist and observer, his paintings of prairie life, including plants, were rendered with accuracy and detail. He portrayed his depictions of buffalo as realistically as possible, studying even the bone structure. Hays died in New York City in 1875. Hays son, William Jacob Hays, Jr., also pursued an artistic career as a painter of western art.
AskArt bibliographic references: Samuels, Harold and Peggy. Samuels Encyclopedia of Artists of the American West. United States: Book Sales, Inc., 1985. This book is the most comprehensive biographical entry on Hays. Includes list where other Hays works are located.
Taft, Robert. The Pictorial Record of the Old West: II. W.J. Hays. The Kansas Historical Quarterly, May, 1946.
Biographical information, as well as a collection of letters written by Hays during his 1860 trip up the Missouri River.
Taft, Robert. Artists and Illustrators of the Old West 1850-1900. Princeton: Princeton University Press, 1982. Includes biographical information on Hays and contemporary artists of his time, as well as sketches and paintings.
[Adapted from submission by Jennette Durham, an intern at the Buffalo Bill Historical Center, spring 2003 to the AskArt online database].

Generally good and attractive estate condition, one very small 1/8" circular loss to buffalo upper left front leg visible in detail images, even moderate mellowed varnish, when viewed in angular (raking light) one can see several lines of evenly spaced fine vertical craquelure together with very to extremely fine all over craquelure but neither are readily noticeable under normal viewing (see detail images). Work is unstretched and was laid down on old pressed paperboard (non corrugated cardboard) a very long time ago and that board has naturally browned over time. Frame has some scattered losses but still very handsome. A little estate discovery gem! Note that we blacklighted this work July 1st and found scattered old inpainting to several spots on the grass including in front of the bisons front hooves and over or about the last digit of the date however the monogram and first digits of the date are not overpainted.